Your Life Doesn’t Have to Look Like Everyone Else’s 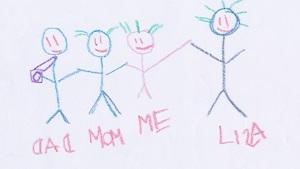 About nine months ago, at the age of 36, with the majority of my friends married and owning houses and raising kids, I moved in with a family to rent a room from them. It’s not what I envisioned for 36, but it’s great. I get to live in community with friends. I have two adorable pseudo-nieces who never fail to melt my heart with the artwork they leave on the counter for me. Plus, I get to see the good and hard of marriage and parenting. Matt and Sarah get to see the good and hard of singleness in your thirties. Win. Win. Win.

This isn’t the first time I’ve lived with a family. In 2011, when the good friend I’d been living with thought she’d be moving out of the area, I began the hunt for a new place. Without other prospects for roommates, I was hoping for a small studio apartment where I could live quietly on my own, buy a cool couch, and be the independent, responsible thirtysomething it seemed that people expected me to be.

What I got was six “housemates”—two parents and four kids ranging in age from three to eleven. The youngest was not-yet-potty-trained, the second youngest, at five, had a million-dollar smile and yet couldn’t stop talking to save his life, and the house was rarely empty or quiet. But my year-and-a-half with them was, simply put, a delightful gift. They became family, and their house became home. Soon after I moved in, I could tell it was the best place God could have put me for the season I was in.

Some people, however, didn’t get it, and, it seemed, didn’t quite know how to categorize me when I told them I was renting a bedroom-bathroom space from a family. (Granted, I think they also often couldn’t understand why a family would want to have a renter in their home!) To them, my situation would have been perfectly acceptable for a recent graduate who was trying to figure out their life. But for a thirtysomething who was working full-time (albeit at a non-profit, which was partly why my search for an apartment I could afford had come up blank), it was odd.

Since that time, my life has continued to take unexpected twists and turns, some of which have brought similarly puzzled looks from others. Though they might not have explicitly asked, I could imagine their thoughts:

My newest adventure is a move to part-time work—including stepping out of leadership on my team—to pursue an MFA in creative writing and then hopefully teach writing to youth or community college students in an urban context. It’s perhaps not the most financially savvy move (especially for a single female), and already people are confused. And yet, similar to when I moved in with the family of six, and when I took a job in my current city, and when I moved in with the friends I live with now, I’ve strongly sensed God’s leading into this new pursuit and vocation. I couldn’t say no.

The Goodness of Obedience

Many of us feel like there’s one right way to do adulthood. Usually that right way involves a job in which we can earn enough to live independently. Often it involves a spouse, children, a house, and a 401(k). Singleness is acceptable as long as you can afford your lifestyle and you’re looking for love. We expect to graduate, find a job, find a church, try to find a spouse, work hard, dream, take a vacation every now and then, look for community, get to know our neighbors, save enough to retire on, file our taxes, and maybe move to Florida. These are all good things—if they are what God has called you to.

For those of us who have enough support systems and resources to choose what we want to pursue, it’s easy to go after certain things because we feel we’re supposed to, without asking if we’re called to them, if they fit, or if they’re what we desire.

God called people in Scripture to all kinds of things. He told Abraham to go, while the Samaritan woman was supposed to prophesy in her own town. God directed Paul to be a tentmaker among the Jews, while he sent Peter to the Gentiles. Noah had to build an ark and care for animals, while Solomon got to build the temple. His general instructions were the same for all: “Love the Lord your God with all your heart, soul, mind, and strength, and love your neighbor as yourself.” But what, exactly, that was to look like was left wide open.

I have friends who’ve gone back to grad school in their late thirties for a total career change. Another friend splits his time between Iowa City and Juárez, Mexico, serving as an associate pastor of a small church plant and working with Mexican kids affected by drug cartel violence and immigration laws. One friend is a corporate lawyer; another works in ministry and raises her support. I have friends who have adopted kids, had their own kids, or chosen not to have kids. Some work odd jobs to pursue music or videography or photography or art; others sign up for limited-term jobs working on a conference they care deeply about and then trusting God to bring about whatever’s next; and still others have stayed in the same job for fifteen or twenty years. I’ve watched friends step into and out of leadership at God’s leading. One friend even left her job of ten years to take a sabbatical year and not job search.

There isn’t a blueprint to a faithful Christian life as far as where we live, whether or not we marry, whether or not we have children, whether we ever own a house, whether we live with our family until we die, or what we do for our work. Jesus calls us to love God and love our neighbor in any context we find ourselves in, but there’s a lot of freedom to choose the particulars.

Here are a few principles I’ve found helpful as reminders when I wonder if I’m living as I’m “supposed” to.

With any big decision, it’s important to invite friends and family into the process to pray with and for us. But in the end, what’s most important is that we follow God’s voice (after we’ve tested it and made sure it fits within the boundaries Scripture lays out), even if what he’s calling us to might not make sense to those around us. I have friends who have followed God’s call to ministry at great cost to relationships with family members who didn’t approve or understand. But these friends knew obedience to God had to be first.

Often we get to pick.

I fully believe God speaks to us and leads us as we seek his wisdom. And sometimes he directs us strongly without our even asking. Other times we might have multiple options in front of us and not have a strong sense of his leading as we pray and invite others to pray for us. In those cases, it’s okay to pick the option that seems best given the circumstances and our passions and gifts. He leads and guides us, and we get to choose. That combination can lead to really great adventures.

Following God’s lead doesn’t mean a blissful ever after.

We might follow his lead into an unusual or unexpected life and find that it’s hard—harder than we thought it would be. Does that mean we didn’t hear correctly or that we were irresponsible or disobedient? Not necessarily. In Scripture, following God’s (often unusual) call frequently made life more complicated, not less. But he continued to walk with people on the path he led them on, and he grew them through the suffering and hardship they faced. He does the same for us today.

Comparing our lives to that of others is the quickest way to make us doubt our sense of calling. In an instant, comparison can stir up all kinds of desires in us that can lead us away from the peace God wants to give us and even into sin—envy, worry, greed, a hunger for power, self-hatred about how we’ve been made, bitterness. God knows us each intimately and he knows the world’s needs. We have to choose to trust that the path he has us on is for our good and for the good of those around us.

In moments when you’re tempted to compare, tell Jesus how you’re feeling about your life (he can take it), ask him to show you the desire underneath your comparison, and ask him to speak to you about who you are and the life he’s called you to.

Faithfulness to Christ is the measure of a life well-lived. And faithfulness requires seeking him with an open heart and with ears to hear who he is calling us to be each day and where and what he is calling us to. So let’s be people who listen for his voice, boldly obey, and celebrate the ways he uses us together—with our different callings and gifts—to see his kingdom come on earth.

Hearing God Through the Year
Being close to God means telling him what is on our hearts and understanding what he is saying to us. But how do we hear God?

Visions of Vocation
Vocation is more than a job. It is our relationships and responsibilities woven into the work of God.
Teach Us to Want
Isn't desire sinful and selfish? The story of each person is a story of want—desires unmet, hopes dashed, passions pursued and ambitions fulfilled.

Called
To live as followers of Jesus is the most urgent call upon God's people.
Login