Bold Faith as a University Administrator 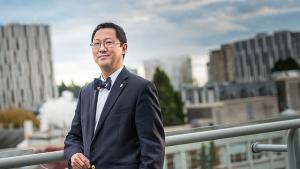 Santa Ono now serves as president of the University of British Columbia. When this article was written, he was working at Emory University as Senior Vice Provost for Undergraduate Academic Affairs.

“Senior Vice Provost Santa Ono won the Brit Katz Senior Appreciation Award for his involvement in the Emory community and his ability to serve as a role model and friend to the senior class.” – The Emory Wheel newspaper, May 6, 2010

While working with Emory University students as Senior Vice Provost for Undergraduate Academic Affairs, Santa Ono also continues the medical research for which he trained at McGill University and Harvard. An article in Emory Magazine reports that his team at the Emory Eye Center’s Dobbs Laboratory is investigating the role of the immune system as the team looks for treatments for macular degeneration and other forms of eye inflammation.

Santa admits that holding two full-time jobs at the same institution can be challenging. “Especially, if on top of that you’re trying to connect with students and faculty. But I love every aspect of what I do with my life. I feel very blessed to be at an institution like Emory, to be able to interact with students of the caliber that we have. It enriches my life to interact with them, not only through InterVarsity but through other organizations.”

The Path to Faith

Santa Ono’s path to faith began in his dorm room as a freshman at the University of Chicago. His roommate, Steve Barry, was involved in the InterVarsity Christian Fellowship chapter. Steve invited Santa to Bible studies and large group meetings, and they talked a lot about faith. As a child of Japanese immigrants Santa was not without faith in God but he described himself as uninformed.

His journey to faith in Christ started slowly, anchored in the witness of his roommate. Their visits to Bond chapel on the University of Chicago campus encouraged him to investigate further. “Steve would take me there. I felt immediately touched by being in that space. I felt like I had never felt before in any other place growing up,” Santa said. “That was the beginning of my search for and eventual finding of Christ.”

During his graduate studies at McGill University in Montreal, his faith in Christ continued to grow through the witness of a friend named Wendy, who became his wife, and their local fellowship, Westmont Baptist Church. After receiving his PhD in Experimental Medicine, he received a postdoctoral fellowship at Harvard, focusing on gene regulation in the immune. He held faculty and administrative positions at Johns Hopkins University, Harvard, and University College London before arriving at Emory in 2006.

Known for his Faith

The “transformative” witness of his InterVarsity friends at the University of Chicago has allowed Santa to fully embrace InterVarsity’s vision for renewing the campus. He not only accepted the invitation from campus staff member Glenn Goldsmith to become InterVarsity’s faculty adviser, he has also become one of the most high-profile Christians at Emory.

“I actually think it’s very healthy for the university community to know of the religious beliefs of faculty and administrators,” he said. “I see no reason why I as a Christian should hide Christ in my life, as long as I show respect for those with different faiths.” He recalled a phrase used by a faculty friend who was a priest, “stealth Christians,” which applies to many Christian faculty members. “Students learn from diverse perspectives across the university community and they can only learn from the richness of a multi-faith community if they can actually see people thinking about, struggling with and practicing their faiths.”

He thinks students are willing to accept the fact that some faculty are followers of Christ, and that others are Jews or Muslims. “Students know that faculty members and administrators have religious beliefs but they rarely see that side of these individuals. I know that many students look to faculty and staff as role models, and seek conversations with them about their faith.”

Santa is energized by his interaction with students, especially those who are in the campus fellowships. “It’s really beautiful to watch them worship and see the fellowship they have with each other and with Christ,” he said. “They’re not shy in talking about the role of Christ in their lives. The students have it figured it out.”

Santa Ono realizes that at some point he may have to make a decision between advancing his administrative career and continuing his medical research. But for now he is thankful that God has blessed him by allowing him to continue both paths and to interact with some of America’s brightest students. He has also served on InterVarsity’s Board of Trustees.