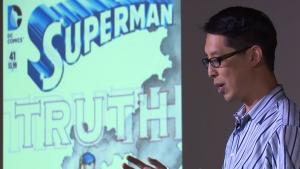 Gene Yang, an InterVarsity alumnus from the University of California—Berkeley, is the son of Chinese immigrants. The graphic novel he wrote based on the experience of living in two cultures, American Born Chinese, has been nominated for the National Book Award in the children’s literature section. It’s the first graphic novel to win such a nomination.

Gene lives with tension in his ethnic identity, Chinese-American; his professional commitments, high school teacher and graphic artist; and his religious faith, how to live and work consistently with his beliefs. His experience in InterVarsity has been a helpful foundation for balancing these tensions.

When Gene started his university education, he had aspirations of training to become a full-time cartoonist. But he submitted to his parents’ wishes that he major in something more practical and took a degree in computer science. He now teaches high school and writes graphic novels in the evening.

While at Berkeley, Gene was an active member of the InterVarsity chapter. He led Bible studies and learned how to be a servant leader. After graduation, he spent the summer at InterVarsity’s Los Angeles Urban Project learning how much God values artists. The next year he was on staff with InterVarsity as a campus intern. At the end of that year, he and the other interns spent a weekend in prayer to discern whether they should continue on staff. At the end of that weekend, Gene made two decisions: not to continue on InterVarsity staff and to publish a graphic novel, even if he had to pay for it himself.

But, wonderfully, Gene received a writing grant and so did not have to pay to publish the first issue of Gordon Yamamoto and the King of the Geeks. Over the next several years, he wrote two more issues of this graphic novel and completed American Born Chinese. Based on a personal conviction that “God, a personal being larger than me, wants me to be who I am,” Gene wrote this multi-layered story of self-acceptance. A friend of his submitted this book to a prominent graphic novel publisher who soon offered Gene a contract. The book has garnered very good reviews.

When Gene was notified that his book had been nominated for the National Book Award, he could not claim that it was a dream come true, because he had never even dreamed that anything like that would happen to him. As he has fielded interview requests and attended book signings, Gene is grateful for the affirmation of his artistic work that the nomination has given him. It is a confirmation that he should use his talent to express the creativity that God has given him.

UPDATE: Gene has continued to advance his graphic narrative skills, becoming an acclaimed author with more graphic novels, such as Boxers and Saints and Secret Coders.  He has now joined DC comics as the new writer for the Superman series. He was profiled in Mother Jones magazine.

In 2016 Gene Yang was named Ambassador for Young Peoples' Literature by the Library of Congress. 2016 is becoming a busy year for Gene. He was interviewed by NPR on Superman and Diversity and also by the New York Times. He also was selected for a MacArther Fellowship.