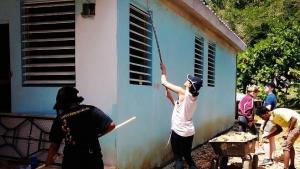 A small house, nestled between palm trees. White-washed walls. A shaded front porch offsetting a bit of Puerto Rico’s muggy weather. Luis was proud of his home. It had taken him five years to finish, building it night after night on top of working a full-time job.

“The island is destroyed,” an official said. Gusts of 150 miles an hour. Streets flooded. An 18-month blackout—the longest in US history.

Almost two years later, Luis and his wife, Deliah, still couldn’t live in their house due to unsafe conditions. Many more homes still lay in shambles. 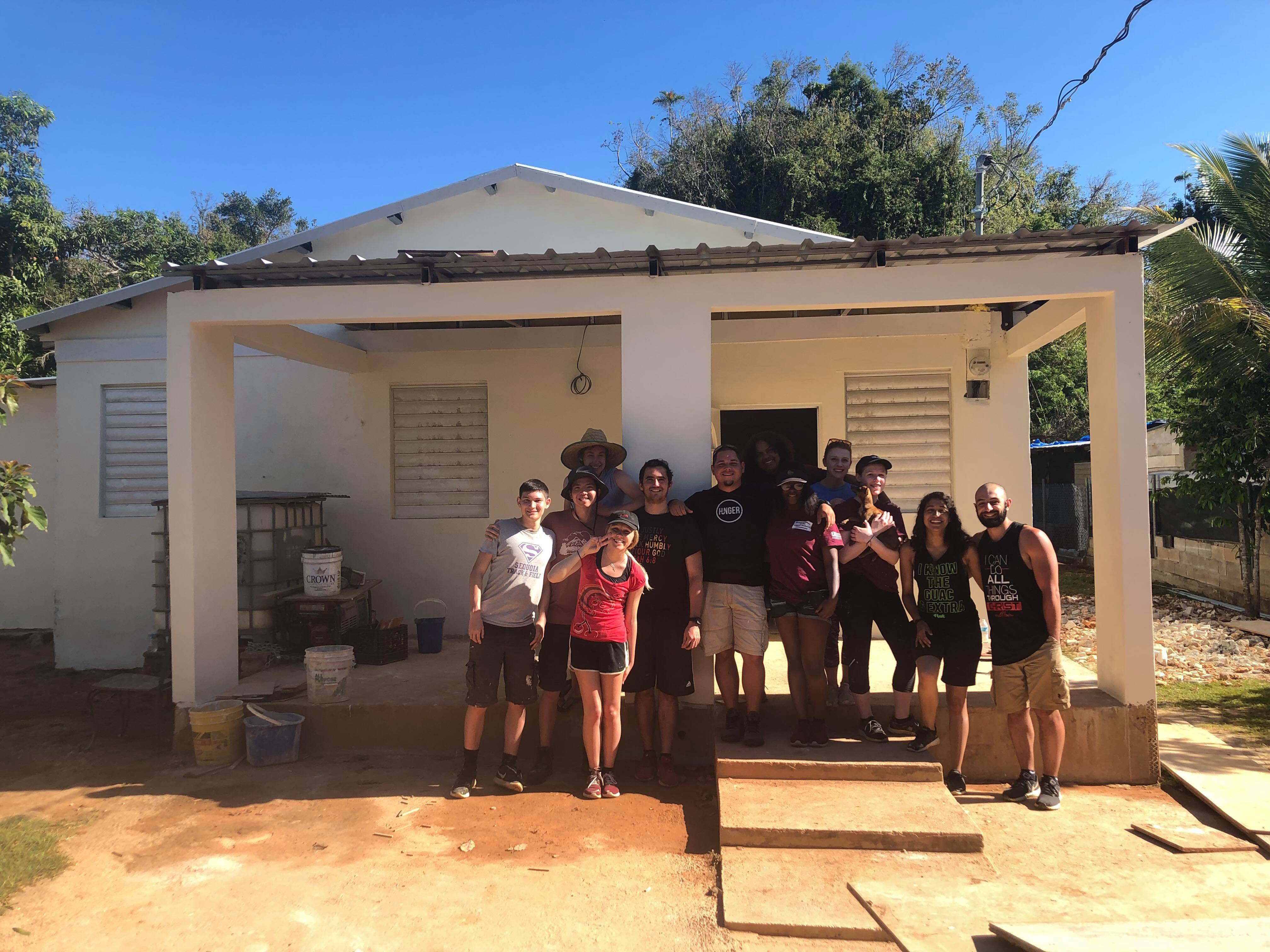 With his mom having grown up in Puerto Rico and his uncle still living there with his family, InterVarsity campus minister Anthony Spina knew he had to do something in the hurricane’s aftermath. Together with Associate Area Director Jessica Pafumi, he began leading ServeUP, an InterVarsity disaster relief trip, down to Puerto Rico. Last year, they recruited over 70 students, staff, and volunteers from all across Massachusetts.

Of the students, more than 20 were non-Christians. “It’s a unique chance for students who would not usually come to our fellowship night,” Anthony said. “The disaster relief portion is definitely attractive to non-Christians (and so is going somewhere warm for spring break), and we’ve found it to be a great place to engage in conversations about how our faith intersects with our actions as Christians.”

Anthony and Jessica teamed up with a local church, Iglesia La Trevisía, to work in a low-income neighborhood that has received no government funding for rebuilding. “We’ve tried to adopt a community and move from missions of relief to development and rehabilitation,” said Ronnie García, the church’s pastor. “We’re hoping that in three to five years, there will be incredible human flourishing all in the name of Jesus Christ.”

The ServeUP team came alongside Luis to help him restore his home. Painting, tiling, roofing—the work was demanding. And with limited access to running water and plumbing, the group had to take bucket showers all week. Even so, the students didn’t complain. They knew whatever work they didn’t finish would be left to Luis after they left.

“Jesus really powered and sustained us all in Puerto Rico,” Anthony said. “It was incredible being able to talk with Luis, a strong man of faith. When Hurricane Maria arrived, he and his family hosted people in his home to ensure the safety of others. He has since been a part of the rebuilding process for other homes in the neighborhood.” 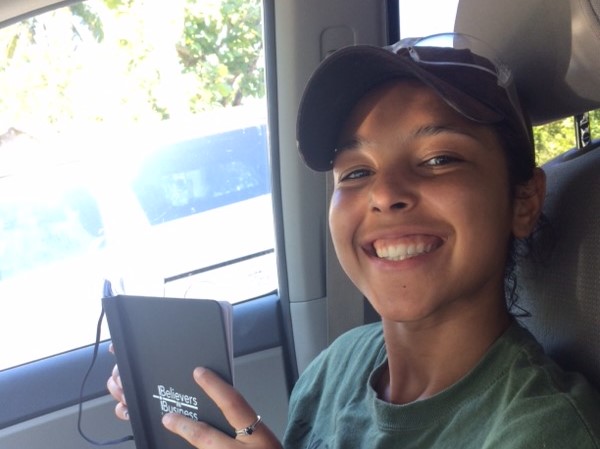 Today I began calling Jesus by his name. I accept him as the bridge to God. Amen. P.S. Thank you for your patience. I know you’ve been waiting. This was the first entry Jay, a ServeUP participant and student from Salem State University, wrote in her new prayer journal. Little did she know that as she worked on restoring Luis’s home throughout the week, God would be at work restoring her heart.

Even before she left for the trip, Jay knew it was going to be significant. Her dad had passed away a year ago, and she knew there was something missing in her life. Jay believed in God, believed in signs, believed that Jesus was a real historical figure. But still she felt alone in her spirituality. If she could find answers anywhere, she thought, it’d be there in Puerto Rico, getting back to her family’s roots.

With Jay coming from another campus, invited to ServeUP by a friend, Anthony didn’t know any of her story. But as he prepared to colead the trip, he felt led to pack an extra prayer journal to give away. And when he asked God for a specific student to pray for, Jay came to mind each time.

During one of ServeUP’s Bible studies, Jay was struck by someone’s insight that Jesus works through people. She jotted that down then started to cross out Jesus’ name—in the past, she’d always substituted “Jesus” for “God” in her notes and mind—but stopped herself, feeling it would be disrespectful somehow.

Later that night, Jay felt an odd restlessness she couldn’t shake. Planning to head to one of the gathering rooms to be by herself, she walked in to find a room full of people. “Jay,” one of the students grinned, “we were just about to pray for you!”

Anthony stepped forward, sharing how he’d been led to pray for her all week, and asked if he could pray now. Jay was stunned. She knew this was a sign and eagerly agreed.

“When we prayed with her, it became clear that Jesus was in the process of doing something very significant in her heart,” Anthony said. “She realized that Jesus was calling her and that he is actually the way to God. Moments later, she surrendered her life to Jesus. I was really amazed with the ways Jesus orchestrated these events: pointing Jay out to me in a room of over 60 students, knowing that he was going to remove all the barriers she had.”

Anthony went on to give Jay the prayer journal he’d brought, and Jay shared her testimony the following night.

In the three years he’s co-led ServeUP, Anthony has witnessed a common theme: participants leave as students, but many return as leaders. “I know that God shows up in really powerful and tangible ways,” he said.

One student, a relatively new follower of Christ, led a small group during the trip. “I saw her blossom in her leadership and in her reliance on the Lord,” Anthony said. “One of [her] group members made a decision to follow Jesus.”

In the weeks and months following ServeUP, other Christian students have grown bolder, fasting more with “more fire in their prayers.” They’ve stepped up to take more ownership in the chapter’s ministry and are closely relying on the Holy Spirit for direction.

Having witnessed so much catalytic growth, Anthony looks forward to this year’s ServeUP, returning next month to Puerto Rico with 50 students. “My hope is for students to realize that following Jesus is much bigger than just what God is doing on their own campus,” he said. “I think it’s really special that we get to be a part of this restorative work—both in student’s spiritual lives but also in a very literal sense with the rebuilding of homes. I think that’s part of what makes ServeUP so special.”

Would you like to pray for ServeUP and other upcoming spring break trips? Sign up to receive our monthly prayer update emails.