Reaching Students (When You’re Afraid of Humans) — An Alabama Story 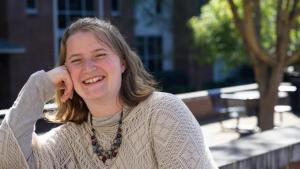 “It had to be geese …” InterVarsity campus minister Amanda Koch muttered under her breath.

Standing in the middle of the sidewalk, she was thankful no one was around on campus to see her getting glared down by a bunch of contentious Canadian geese. They gave no indication of moving anytime soon and looked liable to charge without much encouragement.

Amanda started to turn away and continue her prayer walk somewhere else when she felt like God was telling her to walk toward the geese. With a longstanding fear of these avian interlopers on campus, Amanda was less than pleased by this.

“Okay, God,” Amanda finally sighed as she took a step closer. Slowly, the geese began backing away. Keeping a close eye on them, Amanda edged past and continued on her way, feeling an odd blend of relief and surprise. She’d just faced down one of her biggest fears — with God — and had walked right through the center of them.

This moment, in many ways, sums up Amanda’s dynamic relationship with God since she began planting an InterVarsity ministry at the University of Alabama in Huntsville (UAH). He’s simultaneously gracious and comforting, acknowledging challenges, all the while leading Amanda and her students into deeper places of faith, risk, and thriving.

If you asked 10 random UAH students if they were Christians, most would say yes. It’s generally the only culturally acceptable answer.

But when you go a little deeper, many students’ experiences resonate more with the two disciples on the road to Emmaus (Lk 24:13-35). They may have “head knowledge” about Jesus, an understanding of the practices and values of Christianity, but they’re still missing something. They are still waiting for a direct, personal encounter with Jesus that allows the gospel message to sink deeply into their hearts.

Faced with intense pressure to succeed academically and pad their resumes with a myriad of extracurriculars and internships, many of the students Amanda connects with are struggling with depression and anxiety. “Students are crushed under it honestly,” she said. “Functioning at just a basic level for many of them is overwhelming.”

When not studying, many students shy away from face-to-face interaction in favor of staying in their rooms, playing video games or scrolling through social media for hours at a time. “They’re alone, and they don’t know how to reach out,” Amanda said.

In the two years she’d been planting ministry before COVID, Amanda had deeply struggled to connect with students. As someone who’s always been nervous about talking to strangers, she wrestled with meeting new people on campus. But the shift to online ministry and social media outreach proved to be just the change she needed. 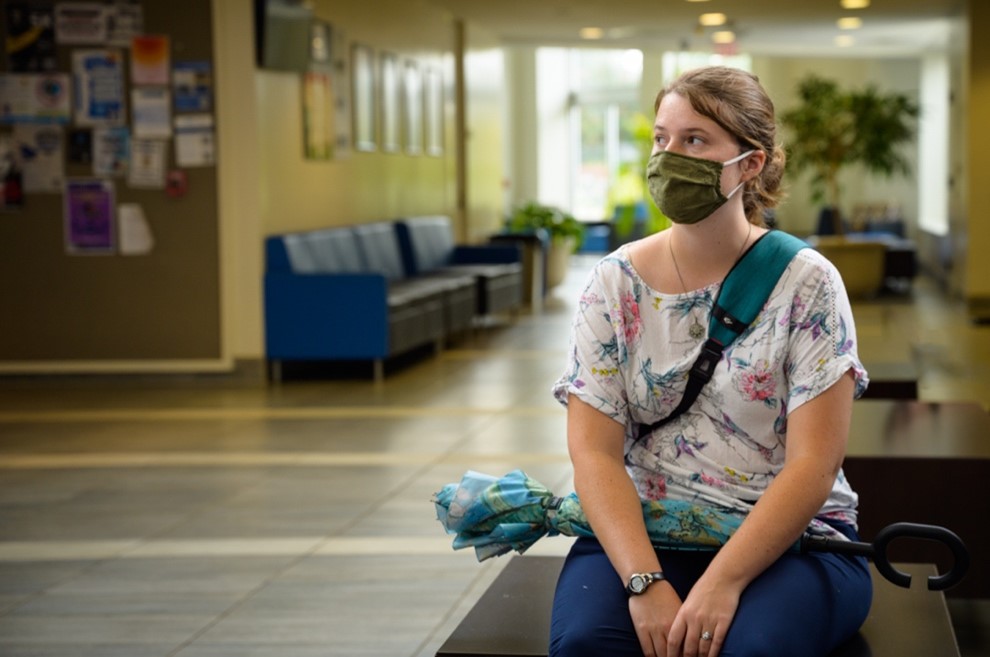 Busy preparing for college and filling out scholarship applications one afternoon in the summer of 2020, incoming freshman Myles Jackson checked his phone. There was a new Instagram message from UAH’s InterVarsity ministry. A little unsure what it was, he opened the message to read Amanda’s introduction of herself and her vision for the group: longing to see students restored through Jesus and gathering in meaningful community.

Myles, a pastor’s son, felt like the message was a sign from God. Sounds great! he replied to Amanda. When do I meet the members of the InterVarsity chapter? 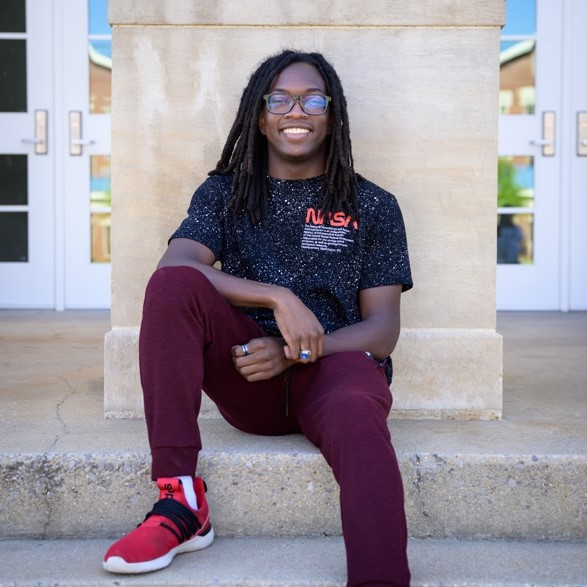 Well, there aren’t any yet, Amanda admitted. But that was about to change — through students like Myles.

As the 2020-2021 school year began, students moved back to campus, but no visitors were allowed in the dorms. So Amanda asked Myles if he’d be willing to help with virtual Bible studies on his floor. “As long as I’m not leading, I’m open to it,” he said. Along with another student, he knocked on the doors of people on his floor and gathered a handful of students.

The more time Myles spent around Amanda and InterVarsity, the more comfortable he grew with the idea of leadership. So when Amanda asked him if he’d be interested in being a student leader a few months later, he decided to say yes. As Amanda began mentoring him, she was stunned by all the responsibilities he was juggling. “How are you not dying!?” she exclaimed. She invited him to join her on a prayer walk around campus.

Having never done one before, Myles was skeptical. But as they walked, God began speaking to him: Relax. There’s no reason for you to be working this much. You’re working yourself to the bone when you shouldn’t be.

Myles took this message to heart, and along with his fellow student leader, Jessica, he began taking regular sabbaths each week — something Amanda has since made a requirement for her student leaders.

Last year, as Myles and Jessica led a Bible study, they had the chance to see two students decide to follow Jesus for real. With some guidance from Amanda, Myles followed up with them to hear more about their decisions. “It’s a reassurance of Jesus being there for them and not leaving them,” he said. “It’s a decision for them to live differently, to bring Jesus closer into their lives.” 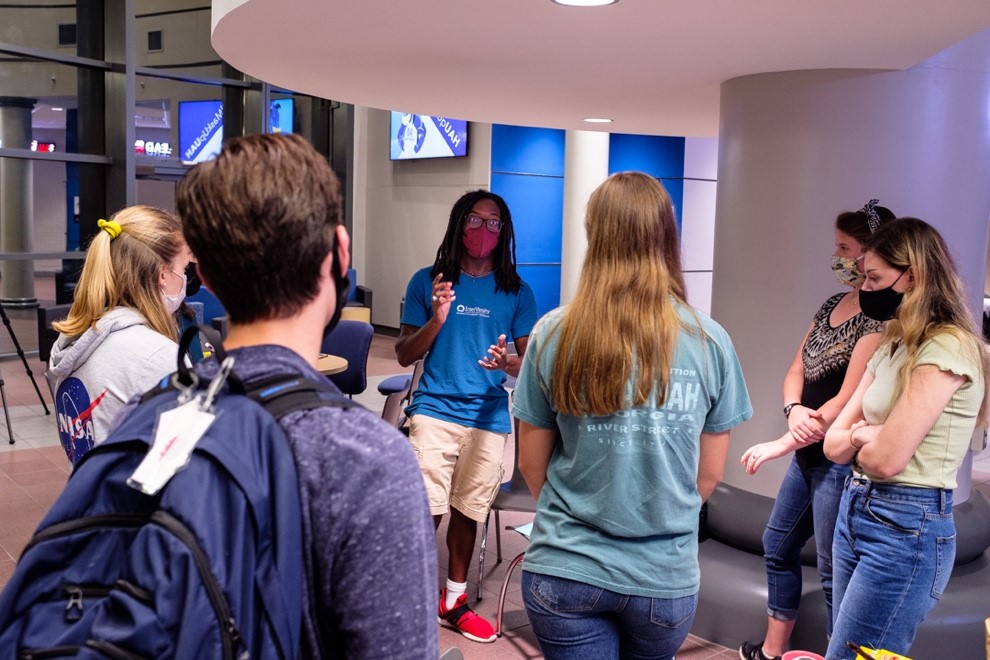 One afternoon in the spring of 2021, freshman Elias Perez heard a knock on the door. He exchanged a confused look with his roommate. They didn’t exactly get a lot of visitors with the dorms in lockdown due to COVID. 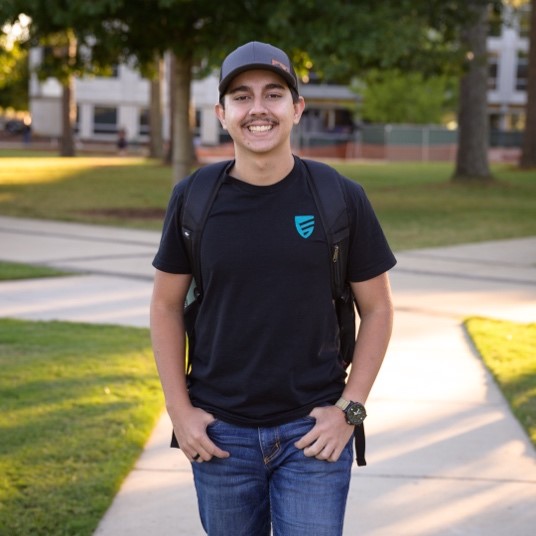 Still, after a moment, Elias opened the door. There stood two InterVarsity students from the floor. They introduced themselves and invited them to a Bible study happening in 10 minutes.

Elias and his roommate exchanged another look and nervously agreed. Walking down the hall, Elias wondered if he’d be prepared or say the wrong thing. He’d tried reading the Bible on his own when he was younger and had quickly gotten overwhelmed. He also had a lot of other things on his mind, having just heard about some challenges his family was going through back home. Focusing on school was extremely difficult.

But as he met the other students — and Amanda over the video call — Elias began to relax. Studying Scripture with other people proved to be a huge gift for him.

Elias attended more InterVarsity events and soon felt a strong sense of community with the other students. And his perception of God changed too. “[Growing up,] I went to Sunday school and Vacation Bible School,” Elias said. “That was going to church for me. … It was the right thing to do. But now I actually have a relationship with Jesus. It’s not just rules.”

Later that semester, Elias joined an outreach event going around campus inviting more people to Bible study. “That knock on my door and being invited to InterVarsity was definitely a Jesus moment,” Elias said. “I was waiting for that knock, for someone to come invite me. And now I’m knocking on other people’s doors.” 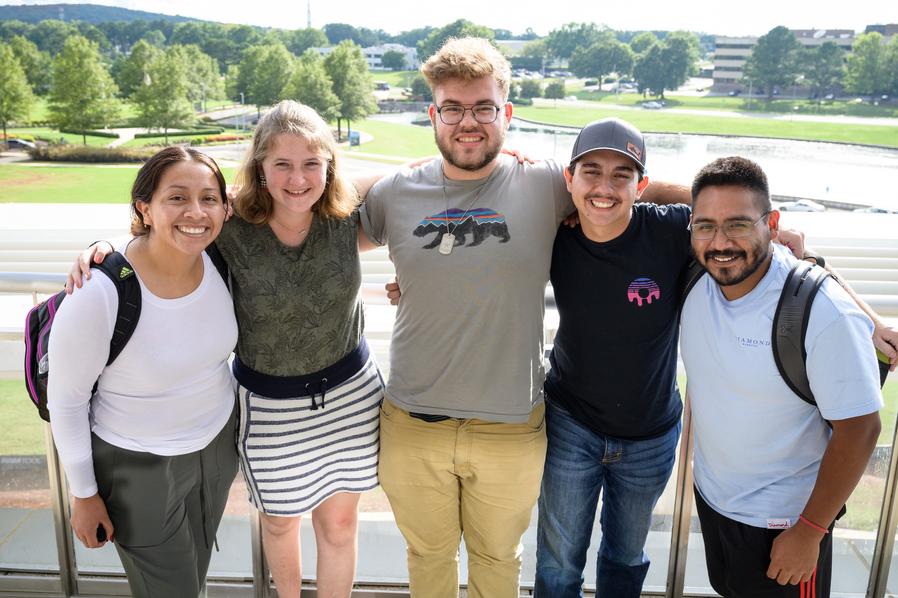 A New Kind of Outreach

“Today we’re going to do some outreach,” Amanda said in the summer of 2021. Immediately, her students’ eyes bugged out in panic, imagining themselves walking up to total strangers. “Don’t worry,” Amanda continued. “It’s probably not what you think.”

The next few hours passed with Amanda and her students huddled together on couches, eating pizza, wrapped up in fuzzy blankets — doing outreach via Instagram, just like she’s been doing.

“Talking to new people is hard for me,” Amanda told her students. “But there’s nothing extra holy about being able to walk up to random strangers and talk to them. It’s just a skill.”

As her students started doing online outreach and saw people responding, it helped them clearly see that God could use them, even if they were shy, to reach more people with the good news of Jesus. And as they gained more confidence, Amanda invited her students to try more outgoing forms of outreach.

God continues to bless InterVarsity’s efforts to create a fun, welcoming environment for everyone on campus to come learn more about Jesus. Last year, three Bible studies were running with about 25 total students. And as many as 70 students came to in-person game nights, connecting with other students, having fun, and hearing more about InterVarsity’s ministry on campus.

As she’s gotten to know more students, Amanda has heard time and time again how InterVarsity came into their lives right when they were struggling the most. Amanda shared, “It’s a really common story for a lot of students to say, ‘I came to college. I was really alone. I met InterVarsity. And it was amazing. And because of InterVarsity, I am here today.’”

Hear more from Amanda and the students of the UAH chapter in the video below!

By Nathan Peterson
Zacchaeus & The Miracle of Being Seen

Zacchaeus’s story is no less a miracle than the feeding of the 5,000 or the healing of the paralyzed man. For it’s the story— the miracle of a changed heart—that still resonates with us today.

Here are some simple ways to remind ourselves of the way we’ve learned to be with Jesus in college. These can help us get through the college transition.

By Kelly Aalseth
What Responsibilities Should I Accept? 6 Helpful Discernment Questions

With so many people hurting right now, I want to be available to everyone. But I’ll never be able to hold all that responsibility in my tiny little pockets. Jesus never asked me to.

Dayonna, a student at the University of Nevada, Las Vegas (UNLV), prepared for the fall semester with a heavy heart.