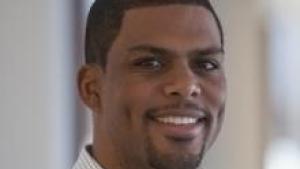 NFL running back, teaching pastor, partner at a prestigious management consulting company—InterVarsity alumnus Jason Wright has quite the resume. And in the summer of 2020, he added a new accomplishment: becoming the NFL’s first Black team president.

After seven seasons in the NFL, Jason turned down a contract to continue playing football in favor of pursuing his MBA in Operations and Finance from the University of Chicago Booth School of Business.

“That’s where my friendship with Jason began,” said Mark Washington, InterVarsity’s National Director of MBA Ministry. “I’ve always been impressed with his ability to combine his passions and pursuits. While at Booth, Jason was a member of a number of groups, including the Christians In Business, Management Consulting, African American MBA Association, and Social New Venture Challenge.”

As an active member of InterVarsity’s Chicago Booth Fellowship, Jason and his wife, Tiffany, participated in a couples’ Bible study, which provided them with helpful guidelines about work life balance that have served them well in the years since.

Mark fondly remembers getting to know Jason and his high-energy positivity and great sense of humor. In the fellowship, he also demonstrated many strong gifts as a leader, being able to talk about difficult topics with truthfulness, compassion, and humility. “He’s the kind of leader you want to follow,” Mark said. “You know he’s competent and also that he cares about the mission and you.”

As a partner at McKinsey & Company, Jason served CFOs, CHROs, and CEOs in sectors ranging from higher education to energy and power. He also spearheaded the firm’s internal efforts on Diversity, Equity, and Inclusion globally and led the McKinsey Institute for Black Economic Mobility, a think tank focused on closing the racial wealth gap.

Well-aware of the prestige that comes with being a former NFL player, Jason found many opportunities to share his faith with younger generations. “I know the right words at the right time would’ve made a big difference to me,” he told Sports Spectrum. “I feel like I would have come to a true and loving relationship with Christ quicker if I had heard [someone talk about] exactly what I was going through.”

As he reflected on taking on the role as President of the Washington Football Team, Jason told CBS, “I already knew we really need to take care of our people in a different way . . . and be people-centric. . . . The opportunities to really shape things for the future of this franchise are massive. You know, we’re getting ready to establish a new identity. That’s going to inform the way that we impact the world.”

This strong blend of butterflies, anxiety, and excitement that accompanies a freshman’s first day on campus has always been there. But COVID took things to a whole new level. Many freshmen never even had the chance to tour campus.

By Brenda Jo Wong
What to Do When Life Gets Hard

In college, I got a Bachelor of Science degree in recreation and leisure studies. I avoided anything and everything that was hard.