The True Gift of Healing Prayer 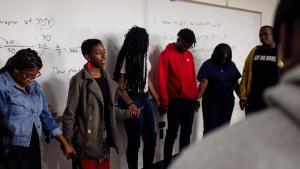 I’ve always been in awe of Jesus’ healing ministry in the Gospels. So many times he just touches people, and, poof, they can walk! It blows my mind that a simple touch from Jesus could make a man who’s been lame for 38 years walk like he never had a problem.

When I was younger, I thought supernatural healing was the coolest thing that could ever happen to anyone. But in college, I heard a sermon about how the true beauty of healing prayer lies in its portrayal of the kingdom of heaven. It invites us to know Jesus more intimately. I didn’t really understand this until I saw healing prayer work differently than I expected.

Healing beyond the Physical

In the year I’ve been on staff with InterVarsity, I’ve seen and heard of plenty of instances of healing ministry. I’ve seen a student leave her crutches in the nurse’s office because her ankle got healed. I’ve seen a student, whose back had been hurting for years, stretch out during listening prayer and heard all his bones crack as his back was straightened. I’ve even had my own ankle, which had been sore and hurting with limited mobility for months, feel and move like I never hurt it in the first place.

But I’ve also seen two instances where healing prayer “worked,” but the problem came back later. The most recent one happened last year at Basileia, a spring retreat for New York and New Jersey InterVarsity chapters. At the start of the week, a student named Kevin shared that he hoped God could heal his allergies, so he could be fully present. I asked him to rate his allergies on a 0–10 scale, where 10 meant he felt like he was going to die, and he said he was at a 9.9. It was difficult to breathe normally, and his whole body ached because of his sneezing.

Kevin said yes when I asked if we could pray for healing. Two other students prayed a strong prayer that Kevin’s allergies would go away. When they finished, Kevin admitted that he didn’t feel any better physically, but he said he felt more joy than he had in months.

We celebrated this newfound joy, and then I asked Kevin if he would like us to pray again. He responded with a hopeful “yes!” After the two students prayed for Kevin again, he said he felt a little bit better, going from a 9.9 to about a 7.

But by the time he got back to his chair, he exclaimed, “Guys, I feel completely better!” He took a really deep inhale through his nose and smiled from ear to ear. The room swelled with energy, and students clapped with awe on their faces, overjoyed by what they’d just seen. I don’t think anyone expected this.

But like I mentioned earlier, the physical healing didn’t seem to last. That same night, Kevin looked miserable. His nose was stuffy, and his body aches were back. He told me that his nose started bleeding because he was sneezing so much, and that he felt like a 9. I told Kevin that I’d continue praying that his allergies would go away, but they never did.

Two days later, before the end of the conference, I saw Kevin walking over to the office getting ready to drive home. I was immediately flooded with disappointment. But Kevin’s attitude was completely different than mine. “I feel pretty awful,” he admitted, “but I’m so thankful for my Basileia experience!”

I was completely shocked. But then Kevin pointed me to two things. The first was the joy he experienced after the first healing. The past few months had been incredibly rough for him. He felt really drained and wasn’t enjoying life. But during that first healing prayer, something moved in him. He felt light and joyful. It was so radically different than what he was experiencing just moments before, so that in itself was a gift.

The second thing he pointed me to was community. Kevin shared that while he’s been so thankful for the fellowship God’s given him through the InterVarsity community at Brooklyn College and throughout his life, he’s often lacked consistent male friendship. But ever since that second day of Basileia, Kevin told me that he’s made so many male friends. People from all over camp would ask if he was the “allergy guy,” and then upon hearing that his allergies had come back, they’d offer to pray for him. Through these interactions, Kevin found out that some of these guys live close to him. He hoped to link up with them that summer to continue to be blessed by male friendships rooted in Jesus.

Even though Kevin had allergies, what he deeply longed for was joy and community. God gave him that both directly and indirectly in his momentary healing. Kevin was so thankful that he got to encounter a Jesus who knew him, loved him, and provided for his needs.

As I reflect on this, I keep thinking about Jesus and the 10 lepers in Luke 17:11–19. While Jesus healed all 10, only one came back praising God and thanking Jesus. Growing up in Sunday School, I was told that he was the only one who was polite, and that we should thank Jesus when he blesses us.

But I think I’ve come to understand a new interpretation considering Kevin’s story. Of the 10 lepers, nine believed that the true gift of their interaction with Jesus was their healing, which seems logical. Leprosy was a debilitating disease that forced people to live on the outskirts of society. No one would even touch them. Imagine going years without a hug! But because of Jesus’ healing, as long as they washed themselves in the presence of a priest, they could go back to live among those they loved.

But the actions of the one leper who came back seem to point to a different gift. After the priest confirmed that he was healed, the first person he ran to was Jesus. The first person he touched was Jesus. The true gift of this man’s interaction with Jesus wasn’t healing. It was Jesus! This man seemed to understand that a relationship with Jesus was much greater than the healing of his leprosy. I’d like to think that even if this person’s leprosy came back, he’d still be praising God in a loud voice because even though he “lost” his wellness, he could never lose Jesus.

I wonder what our lives would look like if we looked at our blessings differently. I believe we’d handle our own financial problems, sickness, and loneliness differently if we believed that God’s true gift to us wasn’t financial stability, health, or intimacy, but Jesus. If he was our true gift, I think we’d continue to rejoice despite our life circumstances just like Kevin and the man in Luke 17.

God, thank you so much for your Son. Thank you that through him, we can have a beautiful and intimate relationship with you, despite our brokenness. Open our eyes to see your Son as the true gift of life with you!