Ḥuṣpāh: How New Christians Can Lead 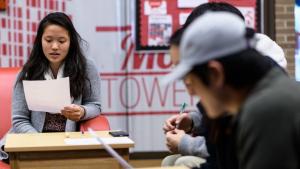 Me, a leader? I was just baptized last week! I mean, I only picked up a Bible about a year ago . . .

These were just a few of the doubts flooding my mind as I looked out over the glassy water of Lake Champion on the last night of Chapter Camp.

As a freshman at Susquehanna University, I had discovered a small group led by an InterVarsity student leader named Gloria. I felt safe there, able to freely hold my questions and doubts about Christianity. Gloria took notice and, over the course of the year, invited me to lunch and her church and also introduced me to her friends. She made a point of getting to know me and learning my story: how I was maybe a Christian but not sure yet.

But I certainly wasn’t leader material. Or so I thought.

Knowing that I was a baby theologian, Gloria still asked me to lead a small group the next year, saying, “Alexis, I think you’d be good at this. You know what’s needed to help people feel welcomed as you have been.”

I thought she must have made a mistake. Someone else was surely more fit to lead than me. Standing on the lakeshore, I felt a lot like Peter in Matthew 14, being called to defy what I knew to walk upon the water. Jesus was reaching out toward me, and despite my fears, I wanted to step out and take his hand.

So, with doubt as my companion, I said yes.

While homegrown-in-the-church leaders certainly play a critical role in ministry, I’ve come to see that we also need leaders who have different perspectives and who might not have grown up in the church. I hold kinship with leaders in the Bible, like Moses, who feel that they don’t fit the mold of a leader among God’s people.

Moses, for sure, didn’t feel qualified to lead. In a familiar scene of the burning bush, God calls Moses to lead the Israelites out of their enslavement in Egypt. Moses, though, isn’t so keen on this plan, responding, “Who am I that I should go to Pharaoh and bring the children of Israel out of Egypt?” (Ex 3:11).

I imagine Moses wrestling with his identity. He’d grown up in Pharaoh’s household, where he was “instructed in all the wisdom of the Egyptians” (Acts 7:22). He’d then spent 40 years as a shepherd in Midian (Acts 7:29–30). Though he was a Hebrew, he hadn’t grown up among the Israelites. He lived an affluent life, separate from the oppression of his people. He later lived among pastures of sheep, a life much different than the Israelites, who were slaves in Egypt. It’s no wonder to me that Moses didn’t feel up for the job. Perhaps he felt like an imposter, like he didn’t belong.

But Moses and God continue their conversation via the burning bush. God insists that Moses leads, promising, “I will be with you” (Ex 3:12). Like a ping-pong match, Moses pushes back with doubt, eventually pleading, “Oh, my Lord, please send someone else” (Ex 4:13).

And yet, despite his doubt, Moses eventually did take a step forward.

And soon Moses’s story begins flowing with what’s called ḥuṣpāh (pronounced “hoospah”), a Hebrew term that means to have nerve or gall, the willingness to take a risk. (You may have heard someone say chutzpah, which derives from this word.)

From the start of his leadership journey, we see hints of Moses’s ḥuṣpāh. He has the audacity to voice his concerns to God. And this trend continues. After receiving the Ten Commandments, the Israelites made a golden calf to worship. Their rebellion infuriated God; he wanted to destroy them (Ex 32). But Moses spoke up on their behalf. He had the ḥuṣpāh to advocate for his community.

Moses’s decades-long legacy leading Israel can feel unattainable until we remember where he started, asking God, “Who am I [to lead]?” I’ve asked myself that many times. Maybe you have too, as a new Christian. As if our story is separate from the Church, and we don’t belong, as if the fact that we question ourselves somehow disqualifies us from leadership.

But what I learn from Moses’s story is that God calls us as we are. God can work with the one who’s willing to take a risk, the one with ḥuṣpāh, even if she or he doesn’t have it all figured out.

A Blessing for the New Christian

We never know where one step, followed by another and another, will eventually take us. With the nerve to try, despite my insecurities, I started leading a small group at Susquehanna. It was a mix of quiet freshmen, a fiery new Christian senior, and my Hindu friend. Sometimes ḥuṣpāh makes you do ridiculous things, like letting the group shake a box I sat in to illustrate Paul’s words to the Ephesians of being “in Christ” (which appears about 13 times in chapter one alone)! Our group asked the hard questions because I was a leader who had them too.

Had you told me then that I would one day be an InterVarsity campus minister, I would’ve laughed and called you crazy. But here I am. And there you are. Sometimes something miraculous happens at the edge of the water. Our fears meet our dreams, and, hand in hand with Jesus, somehow we step forward.

In hindsight, I can say that I’m glad I took the step of leading a small group. And in hindsight, I pray, someday, that you might be glad too. May you make friends with ḥuṣpāh on the journey. May the Lord guide you. Amen.

Alexis Barnhart is an InterVarsity Campus Staff Minister in eastern Pennsylvania. She enjoys walking alongside students as they discover their voice inside God’s story of redemption. You can support her ministry by visiting givetoiv.org/AlexisBarnhart.

Great article ... I'll remember to flow in ḥuṣpāh in doubtful times and step forward like Apostle Peter in faith,to meet JESUS in the water...GOD bless you.

I have been thinking a lot about how the pandemic and sheltering in place with families and friends—some healthy and some not so healthy—affects us. Why are some people more resilient while others are struggling so much? What factors are at play here, and how can we all move toward holistic health?