What Is the Bible? | InterVarsity
Skip to main content

What Is the Bible? 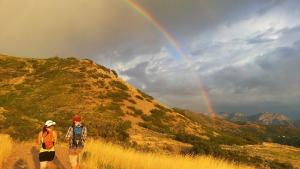 “Make a Christian Squirm” was one of Cole’s favorite pastimes. He’d mine the Bible for challenging passages like Leviticus 20:9: “Anyone who curses their father or mother is to be put to death.” And then he’d ask Christians questions like “Do you really support a God who commands his people to kill children that speak out against their parents?” Then he’d sit back and watch the person squirm …

But then one cloudy afternoon, Taylor, an older mentor, invited Cole on a hike up the popular Living Room Trail behind Cole’s campus, The University of Utah. On the ascending path, Taylor began to explain how she read the Bible in its various genres and historical contexts. And she told Cole how the Holy Spirit had inspired the biblical writers to reveal God and his Son, Jesus Christ, to the world through Scripture.

This perspective — so dramatically different from Cole’s own view of the Bible — was a groundbreaking revelation to him. He experienced his own private epiphany on the mountain, complete with a sudden appearance of a rainbow to mark the moment. (You can see this captured in the unedited photo above.)

Maybe you’ve had your own sudden realization of what the Bible really is. Or maybe you’re a little more like me, who, over time and training through ministries on campus like InterVarsity, came to better understand God’s Word and its purposes. Wherever you’re at, I pray that you find the following overview of the Bible helpful and insightful.

So just what is the Bible? Where did it come from? The 39 books of the Old Testament (OT), or the Hebrew Bible, were composed over a period of about 1,000 years from roughly 1400 to 400 B.C. Its authors include Moses, prophets such as Isaiah and Jeremiah, David, Solomon, Samuel, and others. The texts were accepted as authoritative because God was speaking directly to the author, sometimes in highly critical terms of Israel. Just read through Jeremiah, as I’ve been doing lately, to see the prophet’s scathing critique of his wayward people. This should deter us from any notion that the Israelites wrote a kind of hagiography (self-congratulatory account) of themselves as the “chosen people” throughout the OT.

The final version of the Hebrew Bible seems to be fully in play during the time of Jesus, but exactly how it was finalized isn’t clear historically. For a scholarly overview of the origins of the OT, check out this helpful article based on teachings from John Walton and Andrew Hill.

The 27 books of the New Testament (NT) were written and assembled over a period of about 300 years. The full story of the NT’s formation and accompanying doctrinal disputes can get complicated and nuanced in places. (If you’d like a more in-depth account, check out Roger Olson’s “The Story of Christian Theology”). But the main criteria for a text’s inclusion in the NT was apostolic authority. Thus, a book had to be closely identified with one or more of the 12 apostles to be considered for the NT. Olson’s account reminds us that God used both human brilliance and weakness to accomplish his purpose in assembling the books of the NT.

The Purpose of the Bible

If we zoom out a bit and ask what the purpose of the Bible really is, beyond its origins, various answers will be given. In “The Epic of Eden,” Bible scholar Sandra Richter gives the following summary: “The Bible has one very specific, completely essential and desperately necessary objective — to tell the epic tale of God’s ongoing quest to ransom his creation” (emphasis added).

Let that sink in for a moment. The story of the Bible is the story of God and his plan for saving the world from sin, for ushering in a whole new creation. And while the message of the Bible is never less than this particular storyline, it’s also not more. The intent of its authors is always in the service of redemption and shouldn’t be bent toward other purposes. Richter comments in “The Epic of Eden,” “We forget that [the Bible] was not intended as an exhaustive ancient world history, or a guide to the biology and paleontology of creation, or even a handbook on social reform.”

Nature of the Bible

The lesson just mentioned is to take the Bible for what it is. Don’t fall short or go past its original intent. And that leads to an important point: the Bible is the inspired Word of God. It has an overarching divine element mixed with a human element to accomplish a divine purpose. The InterVarsity doctrinal statement uses these words: “We believe in the unique divine inspiration, entire trustworthiness, and authority of the Bible.”

We don’t generally hold to a “dictational” model of writing Scripture — that God controlled the pen of the authors in some robotic manner — but rather an inspirational model — that by his Spirit, he inspired or moved the human authors within their personalities and historical locations to give us his Word. Thus, discerning the intent of the authors of the Bible is vital to us. Sometimes we use the analogy of the incarnation to compare this blend of the divine and human found in the writing of Scripture. Jesus was fully God and fully man. So, too, does Scripture have a unique combination of the two. (One needs to use such analogies with caution and not press them too far, of course.) The apostle Peter puts it this way:

Above all, you must understand that no prophecy of Scripture came about by the prophet’s own interpretation of things. For prophecy never had its origin in the human will, but prophets, though human, spoke from God as they were carried along by the Holy Spirit. (2 Pet 1:20-21)

Exactly how a perfect God can speak through imperfect human authors, we don’t know. But that’s what he did. And that gives us confidence that we can know the living God and know his master plan of redemption for the cosmos!

As we consider all these details — the Bible’s origins and purpose and nature — I pray that we’ll find ourselves renewed and reformed, traversing our own Living Room Trail like Cole. I pray that we’ll be awakened to the truth of Scripture and encounter God, see his signature written in the sky above and, most importantly, written on our hearts.

Want to learn more about studying Scripture on your own or with your small group? We have a whole site dedicated to our inductive Bible study approach — carefully considering the authorial intent and learning how to apply God’s Word to our lives as we engage Scripture from within our personalities and our own cultural and historical locations. Check it out here!

Rick Mattson is a national apologetics specialist and evangelism coach for InterVarsity. He is author of Faith is Like Skydiving: And Other Memorable Images for Dialogue with Seekers and Skeptics (ivpress.com/faith-is-like-skydiving).

Naomi, a 15-year-old dual enrollment student, wanted to start a ministry on a satellite campus in Keystone Heights, Florida.

By Taylor Straatmann
One Family—Learning Alongside International Students

As Christians called to reach the nations and honor God’s heart for justice, we must share a full gospel—one that confronts injustice wherever it takes place—and make space for international students to meaningfully engage with God’s Word in our US context with us and in their own way.

By Tom Lin
Finding Peace in a Time of Conflict

As we approach Holy Week, Christ’s death and resurrection reminds me that he has given us access to his abiding peace, to the hope of eternal life, and to victory over sin and death. But how are we to live into this?

Experienced evangelist and apologist Rick Mattson has collected dozens of easy-to-use images for explaining Christianity. God's amazing design of the world? It's like getting dealt a royal flush over and over again. Why is there evil and suffering in the world? Because it's a broken world, and things are not how they're supposed to be.