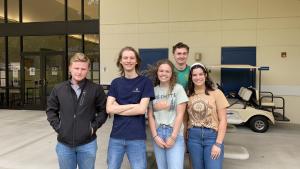 On a typical day at Santa Fe College in Keystone Heights, Florida, students go to class, study, and go home. There are only two buildings on campus. Clubs don’t line the front of the student union during the first week of class. This community college, in a town of only 1,600, isn’t exactly buzzing with student life.

But Naomi, a 15-year-old dual enrollment student, wanted to start a campus ministry there anyway. “I just felt like [we] needed something,” she said. Starting InterVarsity felt like “bringing life” to a place that really needed it.

One day, Tim, another student, was wandering through campus with a dead phone. He was hoping to cure his boredom when he stumbled upon Naomi and Campus Staff Minister, Blake. They invited him to Bible study and he decided to check it out.

Then came Caleb. He couldn’t get a Mountain Dew out of a broken vending machine, so Naomi and Blake offered him one. A month later, he remembered the Christian group he met on campus and wondered what they were up to. He came to Bible study to find out.

Neither Tim nor Caleb were Christians at the time, but what seemed like coincidental meetings on campus would lead to something unexpected and life-changing for both of them.

Naomi grew up in church but didn’t truly commit her life to Jesus until a few years prior. 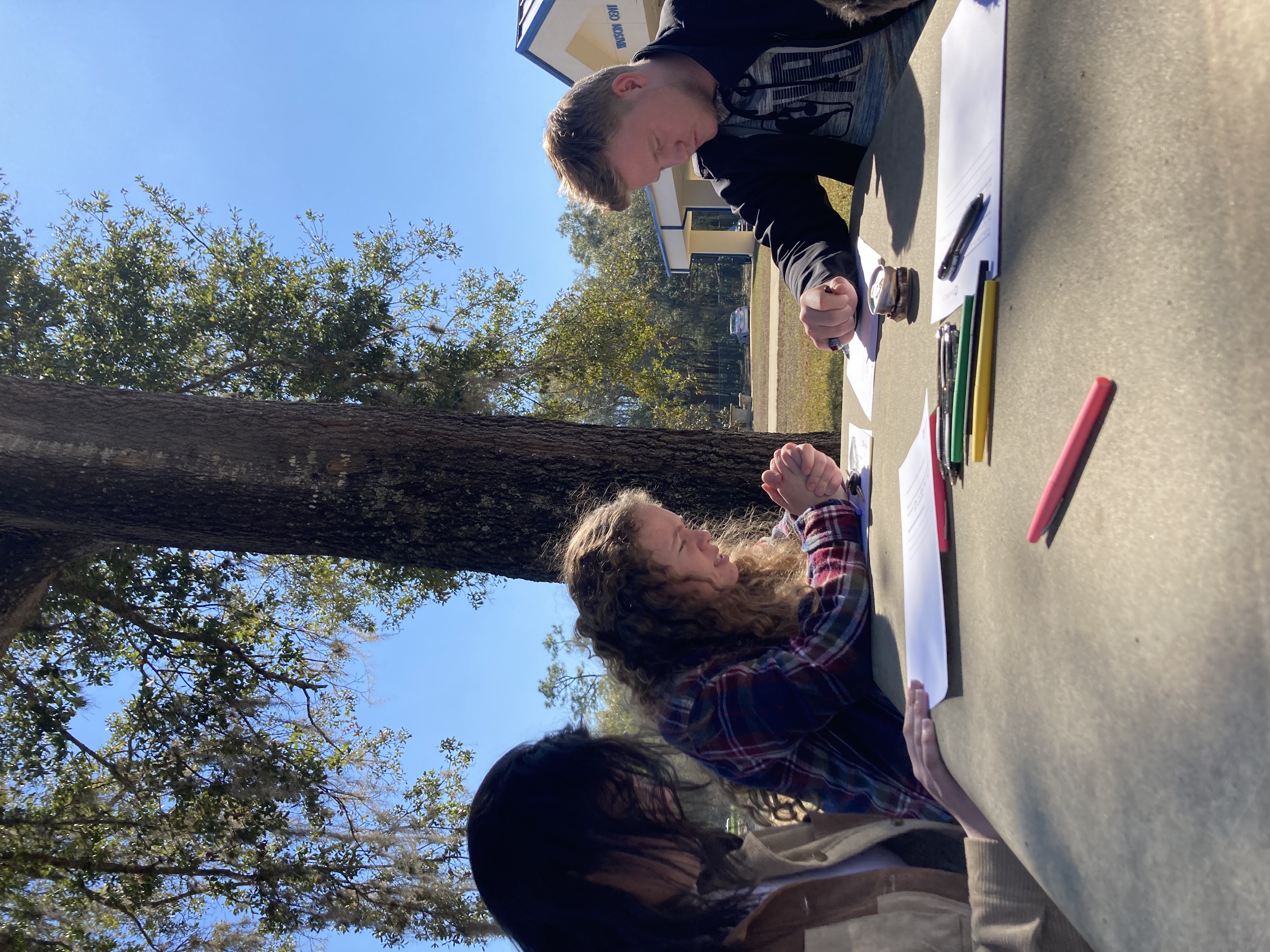 “I actually accepted Jesus in my bedroom,” she reflected. She didn’t feel like she had a “big” enough salvation story. But God told her not to worry; her story was far from over.

Naomi discovered InterVarsity in the spring of 2021 after seeing an ad on social media. Even though she wasn’t a college student, she attended an online small group where she participated in manuscript Bible study for the first time. “I loved it!” she said.

That summer, Naomi went through a training where she learned how to lead her own small group— one that she began later that fall. “She led a rowdy group of guys,” Blake said. “But she did a great job!”

Kyler, another dual enrollment student who was part of the Bible study, had also longed for Christian community on campus. So when given the opportunity, he became Naomi’s co-leader.

As Tim and Caleb settled into their new small group, Naomi, Kyler, and Blake learned more about them. They found out that Tim had an interest in mystical and Norse gods but never had an authentic experience with the living God. Caleb initially struggled with the idea of joining a Christian group. He worried about being judged or feeling like he didn’t belong, but as he discovered a community that instead embraced him, he began to open up.

“I can see God working in [Tim and Caleb],” Naomi said. She had spent weeks praying for them and even asked a group at her church to pray for them too.

Towards the end of the fall, Naomi and Kyler felt it was time to do a call to faith in their group. Naomi shared her story of how she met Jesus, and Kyler presented the gospel.

After the gospel presentation, Naomi and Kyler passed out cards for small group members to discreetly identify whether they had made a choice to follow Jesus. When Naomi got in her car at the end of Bible study, she read through the cards. Tim and Caleb both gave their lives to Jesus!

“It was the most encouraging thing I’d ever experienced,” Naomi said. And it also happened on her birthday. “The best birthday gift I could’ve gotten!” She cried tears of joy all the way home. 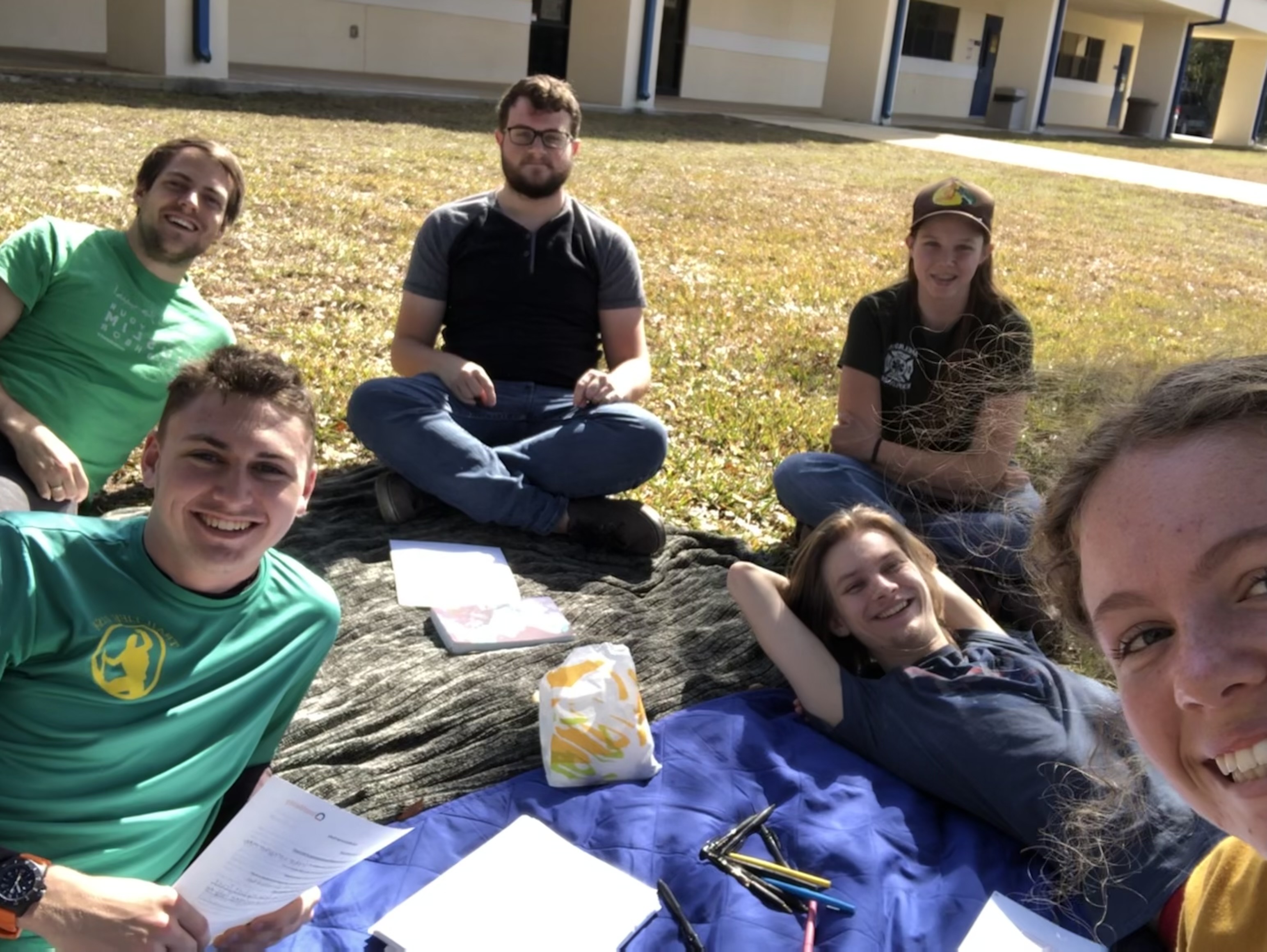 Finding InterVarsity felt like a turning point for both Naomi and Kyler. They can lean on their community, feel safe sharing their hardships, and grow in their faith and leadership.

“I just feel like I have a support system now,” Naomi said.

Even though they led two friends to faith, Naomi and Kyler don’t have it all figured out. They still get nervous before leading Bible study and praying out loud. They worry about not having the “right” words and fear rejection. But they remain ready and eager to see what God has in store for them next –– regularly taking small steps of courage for their campus, despite still only being high school students.

Students on overlooked campuses need the chance to respond to Jesus. If you want to plant InterVarsity on an unreached campus, check out our Start Something New page.

The pandemic only amplified life’s normal unpredictability, pushing some of us beyond our comfort zones. So how do we face the surprises — the good and the bad — in a positive way?

Dayonna, a student at the University of Nevada, Las Vegas (UNLV), prepared for the fall semester with a heavy heart.

Transformation can be exponential. When one student at the University of Massachusetts Boston caught a glimpse of God’s transforming work on campus, she began praying and longing to see that happen on her own campus among fellow Black students.