More Than a Check Box: Reflecting God’s Multiethnicity as a Biracial Woman 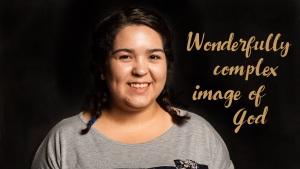 I have watched the movie Selena many, many times.

For me, this movie holds more than just the story of the Tejano queen. It’s the story of a young woman who navigated the musical and cultural worlds of the borderlands, and it’s the first place I ever heard someone give a voice to the experience of being a bicultural—and for me, a young biracial—Latina.

These were things I felt and yet had not realized because I didn’t know how to express what it was like for me growing up. Being teased for not being a “real” Mexican, the feeling of being different at my own family gatherings, the insecurity of not being able to fully engage in the cultural traditions of my friends—these were all part of my experience, and I just saw them as the norm. Sure, it felt awkward and uncomfortable, but as a kid I thought the best response was to ignore it.

Watching Selena, for once I had permission to feel my frustration, even if I didn’t immediately understand my identity and role in the context of my communities.

Going away to college, I was forced to confront those feelings again. As a freshman, developing some sense of identity is extremely important. Which major will you choose? What organizations will you join? Where do you want to live? What do you want to do after graduation?

I was excited to start figuring out this new phase of life. Hoping to include God in this journey, I quickly, though unexpectedly, plugged into the Asian American InterVarsity chapter, not thinking much of the cross-cultural aspect.

Thinking through these questions related to identity brought up a lot of thought around my journey to college. I realized that such a large part of my life had been framed in that feeling of being an outsider, and that I was still operating on a level of loneliness and confusion about my place and purpose as a biracial Latina in classrooms, at work, in my family, and now in my Asian American InterVarsity chapter. The truth was that I was feeling more displaced than ever.

As I spent those first few semesters in college intensely trying to understand God’s purpose for me, and as I heard more from him, it became really clear that my ethnicity was just as much a part of his plan as all the other parts of my life.

And that meant I had to deal with it.

It was so much easier to keep ignoring the exhausting, difficult, burdensome feelings I had around my ethnic background. Opening up those conversations about all the ways that I felt like I didn’t live up and didn’t belong under the labels I held on to was a lot harder. I had to reopen old wounds—and I found many new ones—where the world had continually pitted parts of my own culture against each other.

For the first time I was thinking about my ethnic identity as a whole rather than a binary. And as I learned more of the history that connected me to both the marginalized and the privileged, I began to realize that the hurt and confusion I had felt around who I am as a biracial person was actually a result of the deep-rooted brokenness and hatred around race and ethnicity in our society.

Growing up, I saw and felt the division and tension around race in my community, but I had never even considered how socioeconomic history and the long-standing prejudices in the U.S. had been influencing my family and my little city neighborhood in Dallas, Texas, for decades. Evaluating the set of values and assumptions around race that had been passed down to me, it didn’t seem to make sense anymore.

I realized the problem wasn’t with me.

Once I finally surrendered my ethnic identity to God, I saw that what he had to say about my ethnicity and my place in society mattered far more than anything else I had believed. From the very beginning, Scripture says that God created us, in his image, and it was good. At the moment of creation God established a value in us, not because of anything we had done or could do, but in the sole fact that we reflected the very image of our maker.

Understanding that our history, culture, and very nature of being human are a reflection of God and drawing value in simply being created by him really began to transform my whole conception of ethnic identity. I had been so focused on all the differences and divisions I saw instead of the imago dei reflected in a multitude of ways across cultures.

Seeing ethnicity as more than a check box meant that I didn’t have to try and fit myself into a mold; rather, as a biracial woman, I reflect multiple aspects of God that maybe don’t normally go together, but are equally good in the eyes of my maker. Despite what I felt, my value and identity weren’t things I needed to figure out based on where I was or who I was with; my ethnic identity was and is something that God gifted me with when he created me.

But those feelings—exhausting, difficult, a burden—they didn’t just disappear. I’m still navigating life as a biracial Latina in Texas and I still feel the weight of wishing that I could just fit in. Being a person of color and being biracial in our society inherently means having more cross-cultural experiences and conversations and constantly having to confront the brokenness around race and ethnicity in our world.

The difference is, I no longer have to face it all alone.

God has spoken life into my ethnic journey. Those feelings don’t define my ethnicity anymore, but rather I find value in the multitude of ways that God is reflected in my complex history. Tradition, improvement, emotion, composure, provision, hardships—these things that feel like they don’t quite go together are all part of the larger story of redemption and unity in Christ.

As a biracial person, I know how at odds the world is when it comes to my culture and my identity, but I believe that God formed my ethnicity, just like every other part of me, to reflect his image. I’m not some byproduct. I’m not a mutt. I am a whole and wonderfully complex image of God. And as I choose each day to embrace both the hurt and the joy in my ethnic story, I get to share in reflecting a more redeemed, more whole image of God into the Church and into the world around me.

Multiethnicity Is Worth the Effort

An interview with InterVarsity’s Nikki Toyama-Szeto.

While society may try to be colorblind, God created us with our ethnic identities--for good. With InterVarsity's ethnicity and evangelism specialist Sarah Shin, discover how your ethnic story can lead to compelling witness and mission.