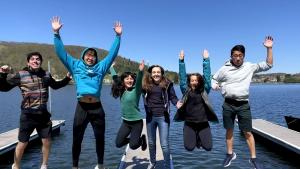 In-person Bible study. Worship and prayer in community. Ziplining, canoeing, hikes, and plenty of space for laughter and reflection with one another in beautiful camp settings. These were the hallmarks of end-of-the-year InterVarsity Chapter Focus Weeks and Chapter Camps across the country in years past.

As with so many things, the pandemic’s disruptions have changed our perspective and made us appreciate these moments even more. And as we enter the summer, many InterVarsity chapters are eager for the chance to gather in-person again for these kinds of retreats.

Over the past couple weeks, three campuses got to do just that.

“Fun will be having community after a year of not being in-person!” said campus minister Daniel Glaeser.

After 16 months of strictly virtual meetings, he and his students at California State University, Stanislaus (Stan State) were ecstatic to see each other again. Soon after they found out that it was safe to hold an end-of-the-year retreat, Daniel and several other campus ministers were inspired to plan Mark Camp—a retreat which usually requires six months of prep work—in just five weeks. At Mark Camp, students engage in one of three tracks: a study on the first 8 chapters of the book of Mark, a study on the second 8 chapters, or a study on Colossians. It’s a time for staff and students to explore Scripture without the distractions of campus and everyday life.

“Mark Camp was pivotal for me as a student,” Daniel said, hoping others could have the same opportunity. Some Stan State students had never even experienced an in-person manuscript Bible study. This would be their first time studying the bible in a non-virtual setting.

While some of the logistics for Mark Camp proved difficult—like gathering individual meals and following all the safety guidelines of the church hosting the event—Daniel knew that every extra step would be worth it. “I’m really excited to see what happens when people encounter Jesus!” he said. 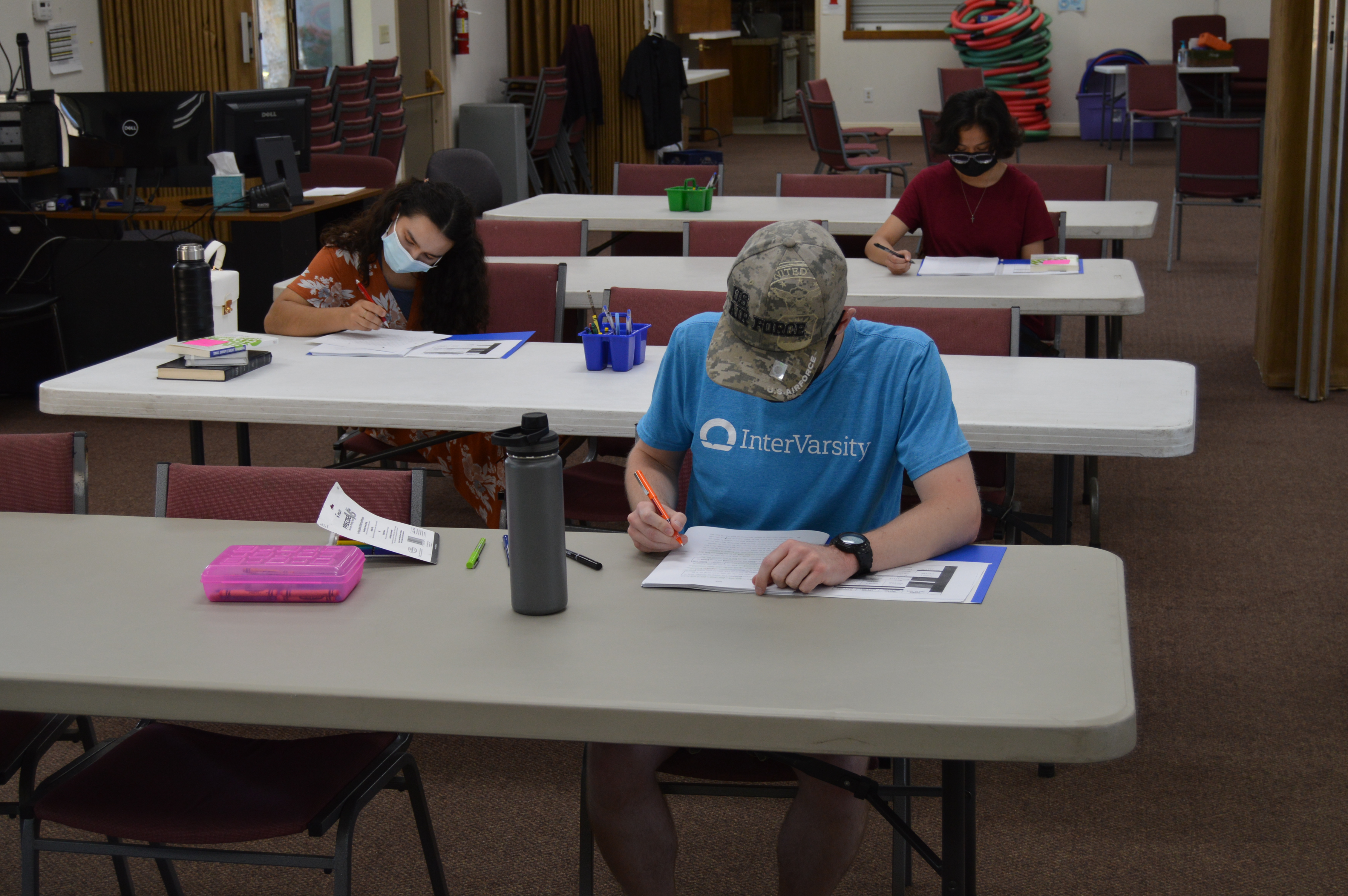 And encounter Jesus is just what they did! During their last debrief session, one student reflected on the new insights he gained from studying Mark.

"Over and over in Mark we see Jesus choosing to identify with and hang out with sinners.  This was stunning to me.  I guess I always thought he would be upset with them,” he said.

Another student, who chose to participate in the Colossians track, had this to say:

"I was hoping that we would have deep discussion, and we did.  Part of our discussion was passionate, uncomfortable and challenging as we defended our viewpoints, but we walked out of that session still friends and I still feel loved.  Some of my friends don't understand why I as an atheist would hang out in a Christian Club.  But I really enjoy the friends I have here."

Halfway across the country at the University of Illinois (U of I) at Urbana-Champaign, students and staff were preparing for their own in-person Chapter Focus Week. Compared to previous years, this looked very different with more spread-out sleeping arrangements, masks being worn during gatherings, and a new location. But none of this hindered the week’s life-changing moments, especially among freshmen and seniors.

Throughout the school year, Sarah Chang, a senior and student leader for 2 years, regularly checked up on the freshmen in the chapter and noticed that they were having a difficult time meeting people online. But Chapter Focus Week finally allowed them to really engage with the rest of their chapter. “I was really happy for the freshmen,” she said.

On the last night, students stayed up until 1:00 a.m. around a bonfire, playing worship songs and just delighting in being together. One freshman stood up and shared that he’d never been to anything like this before. “It’s been the best week of my life,” he said.

For Sarah and other seniors, their pivotal moment came during Thursday night’s large group message on idols. Sarah realized she’d been so preoccupied with her post-college future that it had become an idol. Spending more than a year in lockdown didn’t help ease this anxiety. But like many other students, she made the decision to surrender the idols that were holding her back from following Jesus wholeheartedly. “You could tell there was a release,” Sarah said.

This retreat also gave the U of I chapter a chance to properly send off Sarah and the other seniors. It was a bittersweet goodbye but one that offered students much-needed closure after so many months without in-person community.

A little further across the country, the end-of-the-year retreat at Johns Hopkins University took a different approach, focusing more on student leaders in the chapter.

“They had a lot of curveballs thrown at them this year,” said campus minister Natalie Guajardo. “So we wanted to give them a chance to get away and experience Jesus and each other in a way that’s different than being online.”

Usually, the chapter hosts their weeklong Focus Week in upstate New York with about 150 students. This time, staff chose to host a more intimate gathering, inviting nine student leaders to Maryland for a weekend of reflection and enjoying each other’s company.

After being stuck in dorms and apartments all year, the students were excited and relieved to be in-person, to say the least.

The weekend away gave seniors time to look at Scripture and discern who God was calling to be future student leaders in the chapter. They reflected on biblical leadership and appreciated the fact that there were still students in the chapter willing to say yes.

“It was a beautiful moment of gratitude,” Natalie said.

And, as the weekend continued, everyone discovered that there were more things to be grateful for. With heavy rain predicted throughout the weekend, staff prayed hard for decent weather. They woke up to find one morning so clear and perfect that the group decided to go on a hike. It was exactly what they needed. 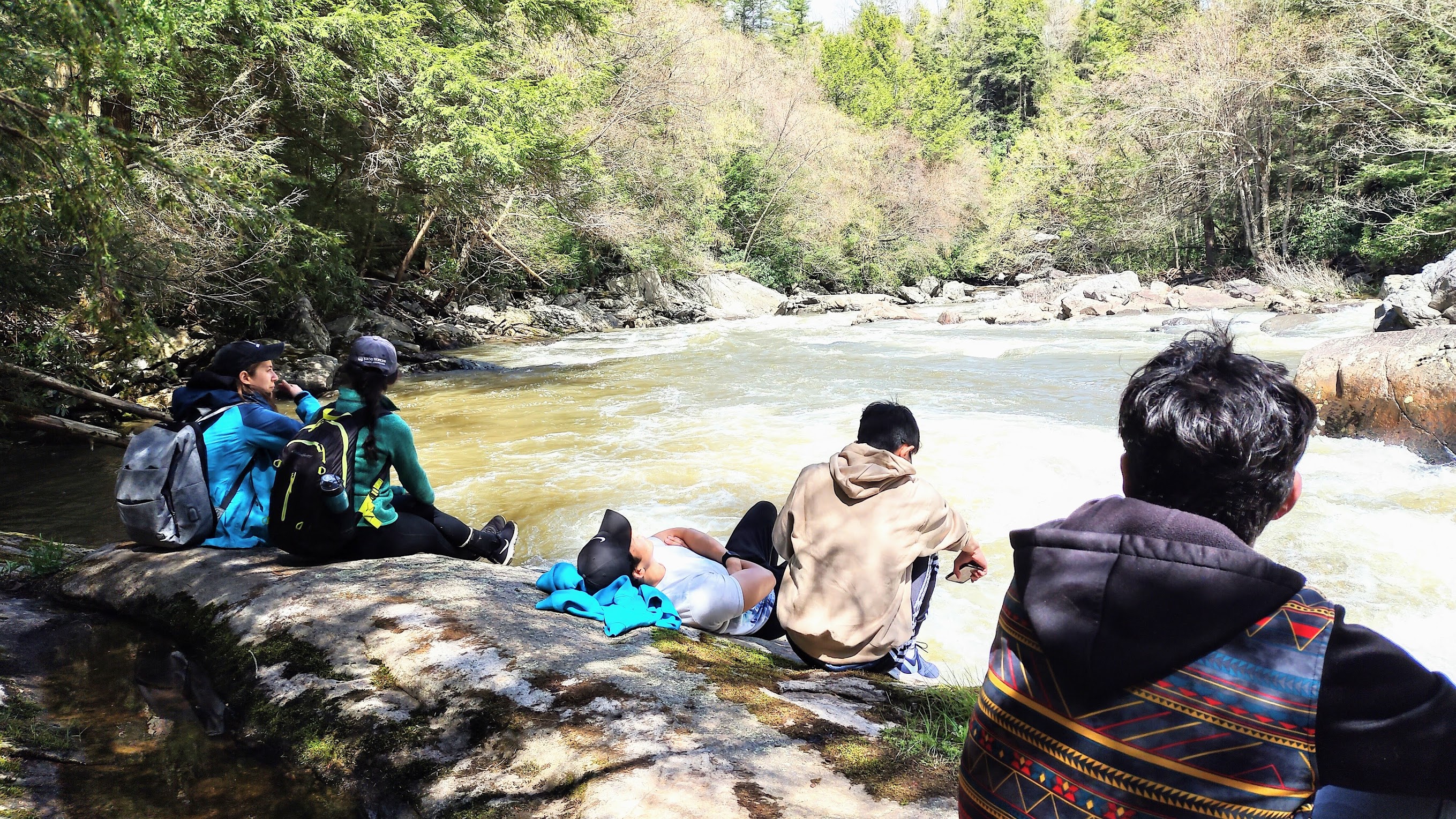 Once they made it back to camp, rain finally set in. But this was good, Natalie reflected, recognizing that Chapter Focus Week usually has a lot of “go, go, go” energy. The rain forced everyone to rest. “It was a gift from God, making us sit still for a while,” she said.

Join us in prayer for InterVarsity chapters who will meet in-person for the first time this summer and for staff ministers as they prepare to transition to a post-COVID campus in the fall. May God bless more students, staff, and campuses with opportunities like these!