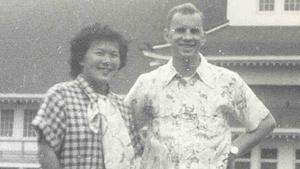 Robert Finley was hired straight out of college in 1945 by C. Stacey Woods, the founder of InterVarsity. During this formative period for a number of evangelical ministries, Finley met and worked with many other pioneers as they followed God’s call to spread the gospel message across the U.S. and around the world in the post-World War II era.

Finley came to the attention of the leaders of InterVarsity and Youth for Christ by planting and leading a Christian fellowship on the University of Virginia (UVa) campus in Charlottesville, beginning as a freshman in 1941. He also became known as a Christian athlete who used his athletic accomplishments as a platform to share the gospel. Finley was undefeated for two years as a member of the UVa varsity boxing team, and in 1944 he was the inter-collegiate middleweight boxing champion. He was also elected student body president.

Finley began to receive speaking invitations while still a student, and one in particular changed his life. A telegram from Chicago invited him to come and give his testimony at a Youth for Christ rally. A crowd of 25,000 was anticipated at the Chicago stadium.

Even though this was the same day as his graduation ceremony in Virginia, he decided to go to Chicago. On the platform he sat between singer George Beverly Shea and Dr. Harry Ironside, pastor of The Moody Church. Afterward he was besieged by pastors and ministry leaders, inviting him to speaking appearances.

Two organizations offered him the opportunity to be a traveling evangelist and he accepted both offers. During the week he would work for InterVarsity on college campuses, and on the weekends he would speak at Youth for Christ rallies.

Finley was constantly on the road, traveling across the Midwest by bus and by train. On Memorial Day 1946, he gave his testimony before a crowd of 75,000 at a Youth for Christ rally in Memorial Stadium in Chicago. Another speaker that day was the young pastor of a local church; his name was Billy Graham.

A lifelong friendship between the two evangelists began. A few months later, when Finley decided he needed to buy a car to begin ministry on the west coast, Graham sold him his used 1942 Pontiac for $1,300.

During his many campus visits Finley became increasingly aware of the growing number of international students studying at U.S. colleges, some of whom he was able to lead to faith in Jesus. Later in 1946, he felt led by God to enroll at the University of Chicago for graduate study in church history. He took the opportunity to move to the International House on campus where up to 500 students from 100 different countries lived.

At every meal in the cafeteria, he would pray and ask God to lead him to a table where he could converse with students about God. His already growing interest in foreign missions was stirred by this unique opportunity to become a foreign missionary without leaving the U.S. Despite his best efforts, InterVarsity did not begin specific ministry to international students until many years later.

In his autobiography, Apostolic Adventures, Finley tells the story of his 1949 return from overseas ministry on a flight through Hawaii. He had cabled InterVarsity’s Gwen Wong that he would be available for ministry. She met him at the airport with an official welcome from a chorus of students and a full schedule for the next week. “She had arranged for me to stay with Christian families every night, speak for student groups every day, at Youth for Christ Saturday night, and three churches on Sunday,” he wrote.

Traveling in Korea in 1950, Finley was in frequent contact with Stacey Woods who referred to him as an ambassador for the International Fellowship of Evangelical Students (IFES). He found Christian fellowship groups abounded in every department of every college and university. Woods instructed him to help these groups affiliate with IFES.

Finley resisted, not wanting them to risk unneeded persecution for being affiliated with a foreign organization as Communism was growing in influence. War broke out and Finley returned to the U.S., but he was unable to patch his relationship with Woods and left InterVarsity for the final time.

In 1953 Finley founded two mission organizations which today continue his legacy. International Students Incorporated, now based in Colorado Springs, Colorado, has staff and volunteers sharing Christ’s love with international students in college communities across the United State. Christian Aid Mission, located in Charlottesville, Virginia, supports indigenous evangelistic ministries in countries all over the world, some of which are closed to Western missionaries.