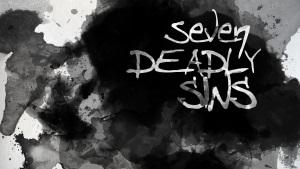 Sometimes anger just feels like the appropriate response. At its core, anger is our response to real or perceived injustice. Think about the things that make you angry. Don’t you feel justified in your anger some of the time?

So how can wrath be a sin if it’s justified?

And didn’t Jesus get angry? Dishonest economics in the temple made him angry. So did his disciples’ lack of faith. Sure, Jesus loved people. But love doesn’t preclude anger. People get angry when someone is hurting a person they love. We see that in Jesus.

How can wrath be a sin if Jesus expressed it?

I wrestled with these questions all summer. I wrestled because I know that anger sometimes is harmful and dangerous. In my anger, I’ve hurt people I care about and have behaved in ways that don’t reflect the great grace and kindness God has shown to me. If that’s not sin, I don’t know what is.

In my wrestling, here are four things I’ve learned about wrath.

You might be thinking you can tease apart “wrath” and “anger.” Maybe one of them is a sin and the other is not. You can dig into Greek and Hebrew words and sift through dictionaries, but that’s a dead end.

Wrath and all her synonyms can be sinful.

Wrath and all her synonyms can be righteous.

It will take more than semantics to hash this out.

2. Anger is a moving target.

Our anger might begin as righteous advocacy for others and ourselves. The sexist treatment of a colleague stirs in us a desire to speak up. An abuse of power by someone in authority over us makes us want to stand up for ourselves. The shooting in Ferguson sparked a protest that continues even after the news cycle has moved on. Real wrongs occur and emotional responses are justified.

When you look at Jesus, you see a similar pattern. He responded to real wrongs with justified emotion. That burst of emotion fuels action. That’s what sinless anger looks like: zeal.

But our anger can easily spill over into something out-of-control. Speaking up can become shouting harshly. Standing up can turn into holding grudges. And a protest can become a deadly riot in a manner of minutes.

Righteous anger can become sinful. And when that happens, everyone around us knows. But often, we can’t see it.

Why can they see it when we can’t?

3. Where you stand matters.

The Lord once asked the prophet Jonah, “Do you have any right to be angry?” A city had just escaped God’s wrath—and Jonah was furious about it (see Jonah 4). How could Jonah be angry when God was compassionate?

Jonah, like us at times, assumed he had the ultimate perspective. He assumed he was at the center of the story playing out.

And he was wrong.

The great lie that often accompanies anger is that we know the whole story. Anger that looks justified from our perspective may actually be out of order. And, trapped in our small stories, we may miss the cues to tell us when the time for anger has passed or when our anger has shifted to a sinful place.

So how can we get a bigger perspective?

I’ve learned that my best protection against sinful anger is a community that can broaden my view.

Earlier this year, I had an intense experience that made me feel betrayed and wronged. And I felt angry. I stewed over this incident alone for several months. Bitterness started to grab me and I made no moves toward reconciliation. I was alone with my anger.

A handful of friends heard what was going on with me and reached out. Some of them were in the room when the incident happened. They shared their experience and helped me figure out where my anger was justified and where it was a result of a misunderstanding.

Hearing their take on the situation helped me. They listened to me, challenged the sinful element that was growing in my anger, and pushed me to figure out how I should respond. They got me unstuck.

Instead of asking “How can wrath be a sin?” maybe we should be asking “Who will help me be angry without sinning?”

Evagrius, a fourth-century monk, created a list of eight common sins to help people be aware of them and guard against them. Pope Gregory I reduced the list to seven in the sixth century, providing us with what we now commonly refer to as the seven deadly sins: sloth, anger, envy, pride, lust, gluttony, and avarice/greed (Michael Mangis, Signature Sins). This is the final post in our series on these seven sins, explaining what they are, how they affect our relationship with God and others, and how we can move past them.

When I was in college, I was addicted to the Nintendo 64 game GoldenEye 007.

Some sins are easy to identify. When I hit the snooze button for the twelfth time, it’s pretty clear I’m struggling with sloth.