Epiphany Reflections—A God Who Wants to Be Found 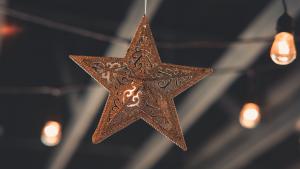 That’s God in the Christmas story. From the cosmic endlessness whose apathy is symbolized by the trillions of stars burning away in its curtain of emptiness, God pulls one down to mark his place in our world and ours in his.

When the star rested over Jesus, I imagine it like a metaphysical hourglass with the sand flowing both ways. God poured the crushing, uncaring, unfeeling infinity of the universe down into a single star, and pushed the creation-renewing, life-giving, soul-pursuing infinity of himself up into the world through Jesus. His message was clear: no matter how vast the world seems or how unwanted you feel in it, I am here to be found. And wherever he is, there is hope.

Drew Larson works as a writer on InterVarsity’s Communications Team in Madison, Wisconsin. You can buy his book here (https://www.amazon.com/dp/B09V21MXDF) or support his ministry at donate.intervarsity.org/donate#15790.

Thanks Drew, I've been

Thanks Drew, I've been enjoying your posts (started with "Spiritual warfare") & then discovered several more of your blogs to read this past August. Good stuff, solid writing!