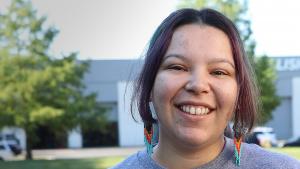 Walking down the sidewalk at the University of Oklahoma (OU), Zelma Wind saw a huge pillar of white gush up into the sky. She froze mid-step, glancing around. So, I know I’m new here, she thought, but … this doesn’t seem normal. The closer Zelma came, more plumes of white shot up into the air as a group of students ran back and forth across the grass, laughing and yelling.

“Hi!” Zelma turned to see a young woman, covered in a thin layer of white dust. “My name’s Kati. We’re from a campus ministry called InterVarsity, and we’re having a snowball fight with flour! Wanna join?”

“No,” Zelma’s introversion got the better of her, and she started walking away.

Desperate to Be Free

Despite all the joyful moments Zelma experienced as a child, her own traumatic memories and that of her people — the Muscogee Nation — made her believe that some things in life were just too good to be true.

She’d decided to get baptized as a child but soon turned away from God, exploring New Age religions and eventually settling on agnosticism. “I never questioned if God was real. I just questioned whether he cared,” she reflected.

Her experience at her first school, the College of the Muscogee Nation (CMN), only added to her struggle. Having always been more aware of the spiritual, Zelma could sense the sorrows and hardships that past generations had experienced on this land. She often saw and heard things in the dorm that frightened her, and she had horrible nightmares. It got so bad that she’d stay up till five in the morning, sleeping with the lights on and blaring music through her headphones. The only real escape she had was partying. When she drank, she wouldn’t hear and see those things for a time.

She was so desperate to be free that she agreed to attend a church retreat with a friend. At the retreat, several people prayed over Zelma. At first, she was uncomfortable, wishing they would stop, but then something changed. She felt a peace she’d never experienced before. And though Zelma still had many questions, she decided to follow Jesus.

After graduating from CMN, Zelma decided to head to OU to continue her studies. One of her most fervent prayers about this new transition was: “Lord, can I have some Christian friends?”

God began answering that prayer through Zelma’s first interaction with Kati and the other members of the InterVarsity chapter. As she got to know them, she slowly began to trust them — and God — more. And through InterVarsity, Zelma learned how to study Scripture and pray.

By her second year at OU, Zelma decided to start her own Bible study. But getting other students together proved challenging. “All those times no students showed up, my campus minister would be like, ‘Okay, let’s pray.’ or ’What is Scripture speaking to you?’ She really played a part in discipling me and teaching me how to follow Jesus,” Zelma said.

As Zelma began thinking of her next steps after graduation, two options kept coming up: going to grad school or joining InterVarsity as a campus minister. At Urbana 18, God made it clear that he would bless either pursuit, but he wanted Zelma to join the ministry. As soon as she returned from the conference, she applied.

“Being part of InterVarsity has given me a space to struggle with what it means to be Native American and a Christian,” Zelma said. “I thought [Jesus] hated me. I thought he hated my people. But he doesn’t. And that’s something I want to show my students and other Native Americans. Because if I believed that, then they [probably] believe that too. And Jesus isn’t hate-filled. He doesn’t commit genocide.”

After spending a year in Colorado as a Ministry Intern with Native InterVarsity, Zelma sensed God calling her to return to CMN to plant a new ministry. But she was terrified. Memories of the nightmares and visions she’d experienced there flooded her mind. But Jesus soon brought a sense of peace and confidence.

When Zelma began starting a ministry at CMN in 2021, she knew honoring local elders and campus authorities and receiving their blessing should be a priority. After struggling to find the best way to connect with the college for almost a year, Zelma happened to see the college president in a conference room one day and got permission then and there to start a Bible study. “Zelma has been welcomed with open arms — a faculty and staff prayer group even made praying for Zelma and her ministry on campus the focus of one of their prayer gatherings earlier this year,” said Megan Krischke, the National Director of Native InterVarsity.

Last semester, Zelma hosted a prayer event, going through the students’ dorms praying over them, well aware of the many things they struggle with. A handful of students have come to Bible study this school year, and she’s had more opportunities to connect with them.

Zelma's experiences of God’s goodness in her own life makes her eager to reach more students. “As far as I know, Zelma is the only InterVarsity staff who has attended a tribal college,” Megan added. “It is because of Zelma’s long-term relationships at the campus and in the community that she’s both welcomed and can effectively minister on that campus.”

As we celebrate Native American Heritage Month, learn more about the amazing things God is doing through Native InterVarsity!

I loved Zelma's story. Thank you for sharing it and opening my eyes and heart to the needs of Native American Christian students, servants and people. I'm curious...you have Nathan Peterson's account information at the end of Zelma's story, but why not hers? When I clicked to "Check out Native InterVarsity" it was not directly an opportunity to support Zelma or her ministry or the Native ministry in general, but information, which is helpful but i thought there might be a more obvious, big opportunity to give. Maybe there is, but I completely missed it! Thanks.

Hey Lindsey, thanks for

Hey Lindsey, thanks for reading! If you click the hyperlink in the first paragraph for Zelma's name, it will take you to her donation page. Here it is for easier access: https://give.intervarsity.org/home?v=1&utm_campaign=home&g=22632,o.

Following Jesus’ example is the best way to help others: we need to go away by ourselves for prayer and quality time with God.

The summer after my sophomore year of college, I prayed to God for a community of friends. My time thus far in college had been dull and I knew something seriously important was lacking in my life. Shortly after, I got plugged into InterVarsity on campus and made a ton of new friends.