Advent 2021: The Light Behind Us | InterVarsity
Skip to main content 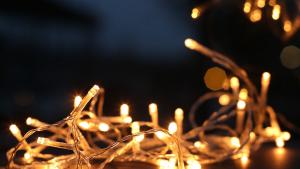 It makes perfect sense to me that we celebrate Christmas by hanging strings of lights.

Whether we’ve ever imagined it or not, Christmas lights are a powerful symbol of Advent. By arranging lights sequentially, stringing them one after another on a line, they suggest proximity—not simply nearness but also direction.

The Light of the world, Christmas lights tell us, is not flickering aimlessly in the night. He came from somewhere and now awaits us somewhere. There is light ahead of us and light behind us. In Advent we often focus on the former—but we don’t want to miss the latter.

That the world begins in darkness, as Genesis 1 tells us, is not an incidental detail to Advent.

Admittedly, this might not be immediately apparent. Advent themes are primarily forward-looking. During this season, we wait for the light that is coming. We await the dawn that will break, anticipating the sun that one day will scatter the darkness. Advent is a future-oriented time, pointing our eyes to the horizon and training our hearts in the habits of waiting, longing, and hope.

At the same time, I’m fascinated by the ways that Advent is also backward-looking.

Because we live in the in-between space of Jesus’ first and second coming, our waiting is distinctly bidirectional. We look back to what was once true—Jesus here on earth, “God with us!”—and hope for the day when it will be true again.

The image of light, in its scriptural context, encourages this bidirectionality. It pulls our imaginations forward and backward: to Revelation 22:4–5 and the city where “there will never be any night . . . because the Lord God will be their light” and to Genesis 1 where the Lord says, “Let there be light.”

Our Advent waiting is for a what as well as a who. In longing for the return of Jesus, we also long for what will become true when he returns: the perfect shalom of new creation. This is the forward-looking piece of Advent. Right now, as you read this, a city of perpetual light glows behind the curtain of time. Its perfections and comforts are ahead of us, hidden from sight. We wait and hope for what will be true, one day, watching for the light before us.

But the curtain of time enfolds us on both sides, and a light burns behind us as well: the glorious Genesis 1 moment where darkest night first melted into day. We need that light as well, in Advent and always, for what it tells us about the Light of the world himself and the new creation he brings.

The God Who Shines

We need the light behind us because it shows the Light’s power. Genesis 1 adds texture and weight to John’s words in the opening verses of his Gospel, that the darkness could not overcome the Light.

When God spoke the words of creation in Genesis 1, they met no resistance or friction. Darkness could not resist the light’s arrival. The power of God’s spoken word was so absolute that it snuffed out all other realities except the one he chose. Like a candle being blown out, God’s pure desire for light simply made the darkness . . . vanish. His word is power.

Jesus, as both Word and Light, came with this same power. In him we see that the God who speaks is also the God who shines. And we need that hope in the darkness of our waiting, when the discouragements of sin and shame ravage our souls, when the “bleak midwinter” of injustice runs rampant, when our spiritual resources of prayer and obedience and worship seem so feeble and shabby. We hunger to know that the Light actually can triumph over the sin in and around us. And when we look to the light behind us in Genesis 1, we see exactly that.

The God Who Recreates

We also need the light behind us because it shows the Light’s purposes. Part of sin’s great power is how it continually drags us back to Genesis 3 and the loss of Eden. Wherever sin claims victory in our world, it uncreates. It amputates the futures where God’s good purposes for us and his creation have come to pass, dragging us back, again and again, to the first moment of failure when Adam and Eve decided they knew best rather than God, ruptured the shalom of all things, and uncreated a world of perfect love and union with God.

We know this Genesis 3 feeling. Each time we defy, rebel, disobey, fail, or resist God, some good future—big or small—is unmade. The darkness of its curse swallows them whole, forcing us to watch in despair as it does. These vanished timelines of blessing, growth, and wholeness, the pain they cause and the world we endure instead are the context of our Advent waiting.

But God created the world in darkness—and he still is bringing order and light to it today.

Looking at the light behind us means seeing that, while sin can only drag us back as far as Genesis 3, God takes us even further to Genesis 1—the place of “deeper magic” that Narnia’s Aslan knew about but the White Witch did not. In every moment of uncreation where we grieve and turn to God in hope, there is a deeper place of grace that sin cannot reach. God carries us over its threshold into the first moment of new creation, places a hand on our soul in that ancient and primordial midnight, and cries over us, again and again unto forever, “Let there be light!”

This is the kind of Light that came into the world 2,000 years ago, the one whom our Christmas lights so vividly reflect. In him shone the omnipotent brightness of both Revelation 22 and Genesis 1, the light ahead and the light behind. And that is why the darkness could not overcome him—not then, not now, not ever.

Thanks Andrew for your

Thanks Andrew for your insights. Very enjoyable. I particularly enjoyed the use of the Hebrew term :shalom". Most think it means "peace" but a better translation would be "completeness" which I believe fits your conclusions and thoughts much better. Blessings to you.

By Drew Larson
Inside the Bubble: What Jesus Does with Your Limits

We are always, ever shaped by our experiences and environments. To be human is to be limited. Inescapably bubbled.

But if you’re someone who wants to see the difference God can make in you and the world, coming on staff with InterVarsity is a great place to start.

I’ve begun to see how fundamental hospitality is within God’s DNA. And since we’re God’s kids, called to follow his example (Eph 5:1), I see how hospitality needs to be a high priority—whether that’s how we approach freshmen on campus, the new person at work, or visitors to our congregations or small groups, just like Scripture says in Hebrews 13:2