Can God Use My Vote? | InterVarsity
Skip to main content

Can God Use My Vote? 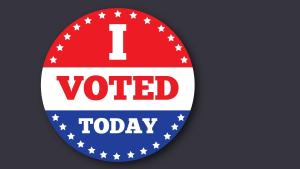 Before a land-owner departed on a long trip, he gave one of his employees a bag of gold to invest while he was away.

When the land-owner returned a year later, he set up a meeting with his employee and asked how the gold was invested.

“Well,” the employee said, “It turned out that there were two major investment banks and a bunch of smaller ones that no one pays any attention to. I began asking around about the two major banks, but all I heard was lots of competing information. And the two banks lie about each other—all the time! You should see how much they advertise. I didn’t see much difference in between the banks and they both seemed evil, so I didn’t invest your money with them.”

The landlord appreciated his employee’s honesty, then asked which of the smaller banks he had invested in.

“So, no one uses any of those banks because they’re too small,” said the employee. “I agree with how they want to invest their money, but what’s the point if no one else is investing there?”

The landlord looked at his employee puzzled.

“Did you invest the gold at all?” he asked the employee.

“No. I have it right here,” said the employee, handing back the bag of gold to the land-owner.

“You’re appalling!” the land-owner exclaimed, “I gave you this because I wanted you to use it for good, but all you’ve done is hold onto it against my wishes.”

Does this story sound familiar?

Obviously this is a fractured parable (the real version can be found in Matthew 25). In this parable, we meet three tenants: two of whom invest the master’s gifts and one who buries it (and is exiled). The moral of the story is that God gives gifts to be used wisely (to grow his Kingdom) and He would rather that we do something with these gifts than nothing at all.

When we read this parable today, we usually think this story applies to our talents or jobs. But, I would argue that we also need to include our earthly citizenship in this list.

Often, we don’t think of our citizenship as a gift. It can seem like an obligation, especially when we get that jury duty notice in the mail or are barraged by ads during election season.

How often do we view our citizenship as a gift that we’ve been given to steward? That our ability to influence systems, structures, and laws in our country is a gift (or investment) that God is entrusting us to invest wisely and judiciously, for His Kingdom?

As much as we want to align with a single candidate or party, I don’t think it’s that easy. I know people on different sides of the political debate (with firm biblical convictions) that shape how they engage in politics.

How can Christians engage in politics?

The biblical call to seek justice, love mercy, and walk humbly with our God is something that we can seek to do in every area of our lives, both when we step into the voting booth, and when we step out of it.

How does your faith lead into or away from political engagement?

If you haven’t registered to vote, the deadlines to register are rapidly approaching! Register to vote today.

thanks for this Chris!

thanks for this Chris!

"It is not enough for freedom to be won. It must also be sustained. Cultural observer Os Guinness argues that the American experiment in freedom is at risk....He calls us to reconsider the audacity of sustainable freedom and what it would take to restore it.”

Impossible People
The church in the West is at a critical moment, facing militant assaults from aggressive secularism and radical Islam.
Login